Agniratha (English dub: /æɡˈnɪrəθə/) is a location inside the head of the Mechonis. It is the Mechonis Capital.

The Machina lived here before the Telethia were ordered by Zanza to destroy them. Many escaped to the Fallen Arm, but the city itself was deserted by all Machina except for Egil and his sister, Vanea.

Shulk and the others travel to Agniratha, the capital of Mechonis, guided by Egil's sister, Vanea, on their way to confront him and end the war between the people's of the Bionis and Egil. She takes them to the top of the tower in the center of the city and shows them a recording of the attack on Agniratha by the Bionis and the Telethia under Zanza's control. From there, they proceed to activate the transporter that will take them to the Meyneth Shrine where Egil is waiting. Before they can use it however, they are attacked by Gadolt (Jade Face). Upon defeating him, Meyneth (through Fiora), restores his lost memories. Reyn promises to get him a doctor, and Gadolt asks him to look after Sharla for him. They then travel to the shrine, and try to reason with Egil, but to no avail, so they are forced to fight. Shulk manages to wound Egil with the Monado, and Egil decides that they are worthy of falling to his Mechon. However, Egil leaves during the fight to reawaken Mechonis, and Agniratha starts to collapse. Upon leaving the shrine, they find that Gadolt is gone, but Reyn assures Sharla that he "wouldn't just wait around to die". During their escape, they are almost killed, but Gadolt sacrifices himself to protect them, giving Meyneth time to put up a shield around them.

Although Agniratha was understood to have collapsed at this time, it can still be visited fully intact if, during the subsequent mission to Mechonis Core in the Central Factory, the party travels there on foot. The lifts and teleporters leading to Agniratha are all still fully active, and the city itself appears fully intact with all its usual Mechon, powered doors and interactive terminals. The Meyneth Shrine can also be visited, though no one will be there. By contrast, during the same mission, the Central Factory's path to Mechonis Field is blocked off by collapsed debris, and cannot be reached.

Agniratha in the original version 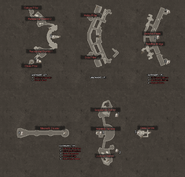 Add a photo to this gallery
Retrieved from "https://xenoblade.fandom.com/wiki/Agniratha?oldid=470624"
Community content is available under CC-BY-SA unless otherwise noted.