watch 01:25
Who is Azurda?
Do you like this video?
Play Sound

"A land of plenty, atop the World Tree... If such a place did exist, perhaps we could all live in peace. With no need for fighting."
— Azurda

Azurda (Japanese: セイリュウ, Seiryū) is a Titan in Xenoblade Chronicles 2 and Torna ~ The Golden Country. Azurda is a small Titan, and takes the appearance of a flying white dragon. Rex lives on his back and call him Gramps (Japanese: じっちゃん, Jitchan, Grandpa). Azurda serves as Rex's guardian, as well as his home. They travel together through the Cloud Sea. After sustaining near-fatal injuries from an encounter with Jin and Malos, Azurda manages to survive, but in the process is reverted to a larval state, a tiny white dragon with a blue crystal in his chest. In this form, Azurda travels as Rex's companion, usually traveling inside his helmet. During the battle, he is reliable and, though sometimes loud, will give Rex various pieces of advice; specifically, he will notify if an enemy changes their element.

Azurda is one of countless Titans who were born originally as Blades from Torna's Womb and was born approximately 800 years prior to the Aegis War. Little is known of his time prior to the war, except that eighty years prior, he was good friends with Jin and Ornelia, Jin's last Driver before Lora. He also had a close relationship with Addam, who refers to Azurda as "Nuncle".

During the Aegis War, Azurda fought in a battle inside the Titan Genbu against Malos' Gargoyles. He later helped Addam, Lora, Hugo, and their Blades repel Malos' assault on Auresco. Before Jin departed to battle Malos, Azurda spoke with him in Torna's Womb, where Jin revealed he couldn't imagine giving up his life to become a Titan. Azurda assumed he must have also thought the same when he was a Blade.

After the war, he came to Fonsett Village, then called Hero's Rest, and was tasked by Addam with protecting not only the village, but the third Aegis blade that Addam had sealed away there. He later met Jin at Ornelia's house after it fell off the Tornan Titan. Azurda asked Jin to come back, but Jin refused and stated that their paths would not cross.

After Rex's parents passed away, Rex grew up under Corinne's house and eventually became a salvager. He set off in the salvaging business while living on Azurda, who he refers to as "Gramps". At the beginning of the game, Rex and Azurda see another Titan sink beneath the Cloud Sea, and Azurda mentions that he too will suffer a similar fate eventually.

When Rex accepts a salvaging job offer from Torna for a large sum of money, Azurda scolds him on accepting a job he has no idea about, though Rex still helps bring up the Ancient Ship nonetheless. Azurda eventually helps Rex, Pyra, Nia, and Dromarch escape from Jin and Malos, though he is hit multiple times by the Monoceros's spears. He crash lands on Gormott and is forced to revert to his larval stage to continue living. He talks to Pyra that same night, and Pyra promises to take care of Rex.

After King Eulogimenos reveals that a third Aegis Sword exists, Azurda states that he knows its location and reveals himself to be the guardian of Fonsett Village. He then opens the pathway into Spirit Crucible Elpys, the location of the third Aegis Sword.

When the World Tree begins collapsing, Pneuma steps aside and talks with both Poppi and Azurda. Pneuma touches Azurda's Core Crystal while Azurda calls Pneuma "a real piece of work." It is later revealed that Pneuma allowed Azurda to transform back into his adult Titan form so that the rest of the party could survive the trip back to Alrest. Azurda then takes the party to the new landmass revealed to them by the Architect.

Azurda is an NPC in Torna ~ The Golden Country. He can be found at Auresco of the Kingdom of Torna, in Torna's Womb, where he sits with Tarath. His Community is gained alongside Tarath's upon completion of the quest Azurda SOS.

"You are our last, best hope, my friends. The future of Torna, and indeed all of Alrest, rests on your shoulders."

Azurda appears as part of the "Cloud Sea of Alrest" DLC stage in Super Smash Bros. Ultimate, which is the second stage from the Xenoblade series. Various other Titans pass by in the background as the fight goes on, including Gormott, Mor Ardain, Indol, and Uraya, as well as the Argentum Trade Guild and the World Tree. Nia, Dromarch, Tora, Poppi, Mòrag, Brighid, Zeke, and Pandoria make appearances as well, watching the fight on Azurda's back. As with the Gaur Plain stage, time passes by from day to night. He also appears in companion form on the Rex Mii costume.

The Japanese name Seiryū, known as 青龍, Qīnglóng in Chinese, is the Azure Dragon, one of the Dragon Gods and one of the four symbols of the Chinese constellations. It represents the east and the spring season. The other three of the four symbols are 朱雀 (Vermilion Bird, Roc), 白虎 (White Tiger, Dromarch), and 玄武 (Black Tortoise, Genbu).

Azurda housing Rex on his back

Azurda in the Cloud Sea

Rex and Azurda in his companion form

Azurda as a stage in Super Smash Bros. Ultimate 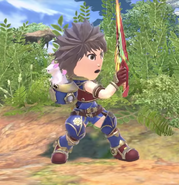 Azurda in Mii Fighter Rex's helmet
Add a photo to this gallery
Retrieved from "https://xenoblade.fandom.com/wiki/Azurda?oldid=486339"
Community content is available under CC-BY-SA unless otherwise noted.