Xenoblade Wiki
Register
Don't have an account?
Sign In
Advertisement
in: Pages with spoilers, XC Characters, Gods,
and 2 more
English

Bionis (Japanese: 巨神, Kyoshin, lit. Giant God; English dub: /baɪˈɒnᵻs/) is a titan in Xenoblade Chronicles. It is the organic counterpart to the Mechonis, and home to the Homs, Nopon and High Entia amongst other forms of organic life. It was also home of the Giants in the past.

Bionis is a white, almost grey, titan that resembles a gigantic warrior. Similar to Mechonis, it wields a sword and has various protrusions on its body. Bionis' face is more humanoid than Mechonis', but does not possess a noticeable mouth.

Before the start of Xenoblade Chronicles, Bionis fought in a tremendous battle with Mechonis. Both appeared to be equally matched, although Bionis did manage to injure Mechonis by cutting off its left arm. The blade Bionis wields is said to have been the same Monado that is used by Dunban and Shulk during the game's story, however with noticeable differences. This Monado is much larger to fit Bionis, as well as being white and having a simple symmetrical design. Eventually both Bionis and Mechonis appear to die during the fight and end up locked in their final positions forever. It is later revealed in the game that they were not dead, just in an inactive state. This becomes the "creation of the world" story for the people of Xenoblade Chronicles.

The Bionis reawakens later, when Zanza exits Shulk's body and returns to controlling the Bionis' actions. He destroys Mechonis and attempts to destroy the party and all life on Bionis as well, but is killed trying. Bionis collapses after the final battle. Its remains are present in the sea around Colony 9 in the new world. 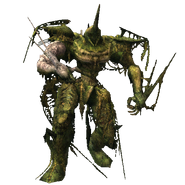 Bionis in its active state

Bionis in its inactive state

View from the Radio Tower in Sword Valley

View from the Bionis' Thumb/Supply Convoy in Sword Valley