Blade Combos are battle mechanics in Xenoblade Chronicles 2 and Torna ~ The Golden Country. They are combined Specials with specified elements performed by Blades. By successfully chaining Specials together to continue the Blade Combo, the damage dealt to enemies increases, and one of the enemy's abilities can be sealed to cause certain effects on enemy or allies.

To contribute to the combo, the Special used must be equal to or greater than the combo level. For example, if an enemy suffers "Heat" and the player wants to use Water to cause "Steam Bomb" (see the table below), the Water Special must be of level 2 or higher. In the same way, for the third element of a Blade Combo, the Special used must be at level 3 or higher. If a Special is below the required level, there will be no extra effect, and the effect gauge will not be refilled.

Exclusive to Xenoblade Chronicles 2; if three Blade Specials are successfully linked, an elemental orb corresponding to the last element in the combo will circle the enemy, giving the enemy added resistance to that element. These orbs can be removed during a Chain Attack.

Using a Special from an attribute that cannot contribute to a Blade Combo will not change the effect. To begin another route for a Blade Combo, the player must wait until the effect expires or they must extend the current combo to its third stage. It is also important to note that using a Special at a level higher than the current combo stage will not serve to advance more quickly. For example, if the player uses a level 3 Fire Special on an enemy with no Blade Combo effect yet, it will not inflict "Mega Explosion" automatically, but rather begin at stage 1 with "Heat".

Torna ~ The Golden Country has a much more streamlined approach to Blade Combos and Specials. Each time a character inflicts a Special on an enemy in a combo, the enemy will receive an element orb corresponding to the character's element and that element orb will circle the enemy. These orbs can also be removed during a Chain Attack. This makes applying element orbs to enemies much faster than Xenoblade Chronicles 2.

As long as a character can use a special with a higher level than the previous stage number it will extend the combo into the next stage. For example, a level four Special will extend a combo from stage one to two but a level two Special will not extend a combo from stage two to three. This means a combo can be completed with any combination of elements used at each of the three stages.

Blade Combos in Torna ~ The Golden Country are unlocked during the battle against Brighid in Torigoth Village.

The following table shows all the possible Blade Combos in Xenoblade Chronicles 2, with the name of the element in bold followed by the name of the resulting combo. Any combination of elements can be a Blade Combo in Torna ~ The Golden Country which is why the combos in that game are not listed here.

In Xenoblade Chronicles 2 the effect of successfully linking three Blade Combos is dependent solely on the final element used. Only one Seal can be effective at a time, depending on the last complete combo. It will affect all enemies until the battle finishes and will last even if the original target of the Blade Combo is defeated. The current effect will display in the upper right corner of the screen. Sealing effects cannot be applied to enemies in Torna ~ The Golden Country.

In Torna ~ The Golden Country the player can inflict extra damage by doing certain combinations of elements at each stage of a Blade Combo. These special Blade Combos are called "Critical Routes" and each has a special cutscene animation. Critical Routes can be easily identified by having unique names for each Special and not roman numerals when a character is ready to use a Special. 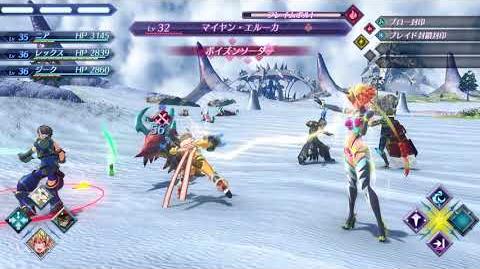