Blade Resonance is a mechanic in Xenoblade Chronicles 2. Drivers can resonate with Core Crystals to awaken new Blades and increase their possibilities. It is not possible to anticipate what kind of Blades will be created from a Core Crystal. Weapons and arts granted to a Driver depend on the awaken and selected Blades. Drivers can bond with multiple Blades and use three of them during battle. It is possible to switch Blades in order to obtain more combinations allowing more playstyles. Certain special Core Crystals obtained during the story progression or quests always awaken a specific Rare or Legendary Blade. Some of them cannot be used for a long period after obtaining them.

Only those who are worthy may have a resonate with a Core Crystal. If they are not worthy and try to bond with a Blade, they will simply be knocked out unconscious or have some temporary negative effects. In worse cases, it can potentially result in death.

Each time a Core Crystal is resonated with, the game generates a list of three Blades which will flash above the Driver, and the third Blade will be awakened. The chance of a Rare Blade being selected follows this equation:

The Idea Multiplier uses the Driver's highest level Idea Stat, and only applies to Blades of the corresponding elements. If two Idea Stats are equal, the game chooses one at random. If a Booster is used, the boosted Idea will be used.

The base probability for each Blade is determined by the group a save file is placed in upon creation.

※ T-Elos requires a medal on the save file for beating the game before she can be pulled.

If a Blade that was previously awakened from a special Core Crystal is released, their base probability is set to 1.

Core Rarity is determined by the type of Core Crystal used.

If at least one Rare Blade is on the final list when a Rare or Legendary Core Crystal is used, the final selection will only be made from those Rare Blades. 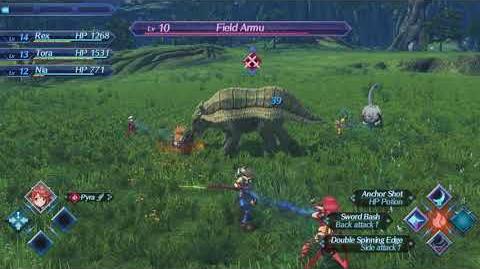