For other uses, see Boss.

Bosses are enemies in Xenoblade Chronicles. As with most games, they tend to appear at the end of a specific portion of the game, they are related to the story event (directly or not, like Quest ones). Bosses have unique names, they can be a character or a monster, they have high stats and potentially unique skills. The first boss encountered by the party is the Mechon M82 during the Battle of Sword Valley.

They have a special frame when looking at them. The battle arena is usually fenced by a green field barrier if the arena is not physically bounded. A rearrangement of the playable team can often be proposed in the beginning of the battle. Once a boss is defeated, the end of the battle is usually followed by a cutscene. No chest is dropped except the Demon Pavlovsk dropping a silver chest. Bosses can sometimes carry items but they are impossible to steal through Riki's Yoink! because these enemies displays 100% resistance to item stealing.

Bosses can be sometimes accompanied by a few Story Exclusive enemies or can summon them. There are twenty-seven bosses, and forty boss battle events plus one side battle event against the Mysterious Telethia. Boss battles are initiated while progressing normally through the story, except the four Story Quest battles, Dragon King Alcar, Master Obart, Satorl Guardian, Skyray, and the Surprise Quest one, the Mysterious Telethia.

It should be noted that Unique Monsters are not bosses. Because the five Superbosses are Unique Monsters, they are not actual bosses, but are still the strongest enemies in the game. 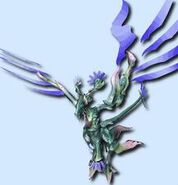 Xord
Add a photo to this gallery
Retrieved from "https://xenoblade.fandom.com/wiki/Boss_(XC1)?oldid=470736"
Community content is available under CC-BY-SA unless otherwise noted.