View source
watch 01:21
Who is Brighid?
Do you like this video?
Play Sound

Brighid (Japanese: カグツチ, Kagutsuchi) is a Special Legendary Blade in Xenoblade Chronicles 2. She is the Jewel of Mor Ardain and the most powerful Blade in the Empire. She can grant tremendous power to her Driver Mòrag and her allies. Brighid uses the fire element, wields Whipswords, and acts as a Tank in battle.

In Torna ~ The Golden Country, Brighid is a special Legendary Blade who can grant tremendous power to her Driver Hugo and his allies.

Brighid - as expected of the Blade of the Special Inquisitor of Mor Ardain and the Empire's strongest Blade - is a strict, dutiful Blade to Mòrag. She is polite and strong-willed. She is also very wise and is attentive to the demands of both her and Mòrag's station; however, she will defer to Mòrag's decisions in conflicts. Knowing about how Blades lose their memories upon the deaths of their Drivers, she has taken to writing a diary to preserve her most precious memories across activations. She shares a strong friendship and rivalry with Mythra, having recollected her time spent with the Aegis five hundred years ago from her diary. She also expects to be treated with respect, and greatly disapproves of Tora's casual sexism, along with Mythra's initial brute force.

Brighid is a beautiful woman with long purple hair that ombrés into blue at its ends. She wears half of it loose down to her thighs and the other half in Chinese-styled buns that are constantly ablaze in blue flame. Her eyes are usually closed, but are revealed to be purple when she opens them, and she has blue flame marks on her forehead above her eyebrows.

She is very tall and has a curvaceous figure accented by her dress; it is deep purple and floor-length but fronted by a transparent chemise. Her arms and legs appear to be covered in blue crystal which resembles the shape and color of her flames. She has a belt on her waist holding a dagger and several orange glow-sticks. Her core crystal is in the shape of a blue tear of flame.

Brighid has three alternate costumes which can be obtained as DLC Aux Cores via Challenge Battle Mode. They are all named after flowers:

As the Jewel of Mor Ardain, Brighid has been used as a Blade for countless years. She also keeps her thoughts in her journal, which is passed down from generation to generation, making her one of the few Blades to have some knowledge of her past lives.

During the Aegis War, Brighid was the Blade of Hugo. Hugo's brother was unable to become a Driver, so Hugo became the Driver of both Aegaeon and Brighid. The Special Inquisitor was to retrieve Brighid's Core Crystal should Hugo fall in battle.

Hugo traveled to Gormott in attempt to find Malos. Brighid and some Ardainian troops located Addam, Lora, and their Blades, and assume them to be the brigands that destroyed Torigoth. She then challenges the group to a battle. During the battle, she criticizes Mythra's fighting style as sluggish and unrefined and narrowly dodges an attack from Siren. After this, Haze uses her power to restrict Mythra and Brighid, and Hugo and Aegaeon arrive and clear up the misconceptions. Brighid and Mythra then develop a friendly rivalry.

She joins Addam's group alongside her driver Hugo as they travel to the Kingdom of Torna in attempt to stop Malos. She meets Malos for the first time in Auresco's gardens and compliments his formidable appearance. She fights him at the royal gardens and once more at The Soaring Rostrum as Malos attempts to destroy the Tornan Titan. As Mythra defeats Malos, the ensuing attack ends up destroying the Tornan Titan's core. Hugo selflessly shields Addam from the large explosion and dies; with this, Brighid returns to her Core Crystal. Lora later delivers her Core Crystal to the Special Inquisitor.

Brighid is first seen as Captain Padraig fails to subdue Rex and Nia. With her help, Padraig is able to capture Nia and Dromarch, though interference from Tora allows Rex and Pyra to escape. She then meets up with Mòrag, her Driver, and the two interrogate Nia and learn the names of Rex and Pyra. Mòrag then begins spreading false rumors of Nia's execution to lure Rex and Pyra into her hands. Brighid later overhears Dughall's plan to capture the Aegis before Mòrag.

After the party subdues Dughall aboard the Titan Battleship, Mòrag and Brighid challenge them to a battle as they attempt to escape. Though they appear outmatched, Rex and Poppi are able to knock over a water tower, temporarily weakening Brighid and allowing them to escape. Brighid notes that Rex had good instincts, and the two agree to not chase after Rex, sensing their paths would cross again.

Mòrag and Brighid later return to Alba Cavanich to meet Emperor Niall and Aegaeon. Niall requests an audience with Rex, and Aegaeon informs the two about Jin hijacking an Ardanian Warship and stealing a large sum of Core Crystals. They also receive word about Senator Roderich's plan to resume excavating Judicium's Titan Weapons in Temperantia.

Rex encounters Mòrag and Brighid once more as Ardainian Soldiers mistake Poppi for Lila. After a brief battle, Niranira reveals that Poppi is not the real culprit; Brighid and her Driver agree on a truce until the true culprit is found. Brighid and Mòrag later appear at Bulge Harbor to assist Rex in fighting off Mikhail and Patroka. Brighid helps surround the members of Torna and introduces Fan la Norne as Goddess of the Praetorium. Brighid and her Driver then join the party as they travel to Indol.

As they stop in Fonsett Village, Brighid overhears a conversation between Pyra and Corinne where Pyra believes that Rex and all of Alrest would be better off without her. When Zeke challenges the party to a battle, Mòrag and Brighid refuse to partake in the battle, and Mòrag later introduces him as the prince of Tantal. As the party reaches Indol, Brighid shows Pyra her journal and advises that Pyra tell Rex everything instead of keeping him in the dark.

When the party receives word of an Ardainian Titan Weapon firing at Urayan forces in Temperantia, Mòrag and Brighid lead the party in the investigation. They discover Senator Roderich did not order the attack and deduce that it was the work of Jin. They later are able to stop the Titan Weapon, and Indol intervenes before war breaks out between the two nations. After Niall seemingly returns from the dead after Bana's failed assassination attempt, he orders Mòrag and Brighid to accompany Rex on the remainder of his quest, and gives them Aegaeon's Core Crystal.

When Rex appears in Anastatia's after having Pyra taken by Torna, he announces that he will leave for Argentum. Once Rex states that Pyra would be better off without him, Brighid slaps Rex and reveals the conversation where Pyra thought it'd be best if she were dead. With the help of Nia and Poppi, they convince Rex to stay and attend a meeting with King Eulogimenos.

After landing in the Land of Morytha, Brighid eventually meets up with Rex, Mythra, and Jin. Using his new power as the Master Driver, Rex temporarily uses Brighid as his Blade until they can reunite with the others. She is hesitant to work with Jin but eventually accepts. She later asks Jin if she is still the same Blade he knew during the Aegis War, to which he replies that it would not matter either way, since currently Brighid is essentially a different person than the Brighid that existed during the War. However, before Jin leaves on the Monoceros, he concedes that she is still largely the same Blade he knew back then.

Brighid takes part in a great many Heart-to-hearts:

Brighid is fought as a Blade boss at level 10 in the Torigoth's Obra Street of the Gormott Province, she is assisted by Captain Padraig.

Brighid is fought as a boss at level 14 in the Torigoth Cemetery of Gormott; she is assisted by two Ardainian Scouts.

As with all story exclusive enemies in TTGC, Brighid drops no items, only gold.

Brighid is one of the characters who can appear on the Super Smash Bros. Ultimate DLC stage, Cloud Sea of Alrest, where she may be present in the background alongside Mòrag. Similar to the redesigns of Pyra and Mythra, Brighid's outfit as a background character was modified from Xenoblade Chronicles 2 due to Ultimate game's lower age rating, covering up her midriff and legs. 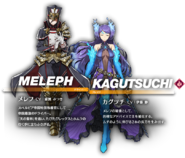