For the mechanic in Xenoblade Chronicles, see Chain Attack (XC1).

Chain Attacks are a battle mechanic in Xenoblade Chronicles 2 and Torna ~ The Golden Country. They can be used by both the party and certain groups of enemies. The members of the Chain Attack take turns using Specials one after the other with one enemy targeted. The party can use Chain Attacks when the three bars of the Party Gauge are full. Each member attacks in succession with one of their Blades.

Before the attack starts, in Xenoblade Chronicles 2 an elemental orb can be inflicted upon an opponent by using a successful level 3 Blade Combo or any level in the combo. During a Chain Attack, these orbs can be destroyed if they are attacked 3 times. Bursting these orbs lengthens the chain attack by another round, increases the damage ratio by 200%, recharges all Blades by 50%, and increases the burst meter. It can be noted that the Chain Attack can only be extended once per round, even if multiple orbs are burst. If a round is extended, a button prompt will be given at the end of the current round. If the button challenge succeeds, the level of Specials will go up by one, and all Blades will recharge by 50%. If a Special move used is of an element opposite that of an existing orb, it will attack that orb and count as 2 hits. Otherwise, it will hit a random orb 1 time. If the target enemy is attacked with the true form of Pyra/Mythra, each existing orb will be attacked once.

The eight elements, paired by opposites, are as following:

If the Burst Meter is filled by destroying orbs in a single Chain Attack. The first destroyed in any round of the Chain Attack will give 50 points towards the Burst Meter. Any extra orbs destroyed in the same round give 100 points. When the meter fills at 300 points Full Burst is activate this can take anywhere from 4-6 orbs. A certain percentage will be added to the damage ratio based on the amount of intact orbs.

The party members then proceed to use all of their Arts with their current Blade, while the party member that had the last turn in the Chain Attack uses their level 4 Special.

If an enemy is killed by a Chain Attack, the rewards they give will increase. The bonus increases the more damage is dealt after the enemy was defeated, with diminishing returns. Bonus only increases the amount of rewards received, and does not affect the drop rate of rare items. 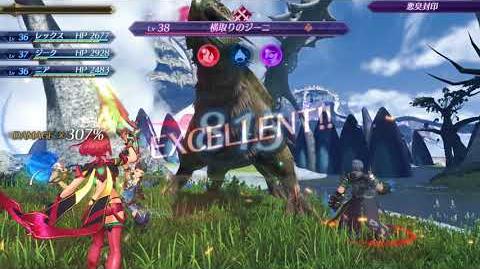 【ゼノブレイド2】戦闘「チェインアタック」
Chain Attack mechanics in Japanese
Add a photo to this gallery
Retrieved from "https://xenoblade.fandom.com/wiki/Chain_Attack_(XC2)?oldid=469022"
Community content is available under CC-BY-SA unless otherwise noted.