Classes are mechanics in Xenoblade Chronicles X. Each Class has a set of melee and ranged Weapons, and several associated Battle Arts.

During battle, the Class Rank gauge is displayed for each playable character. Once the gauge is full, the Class will be levelled up. All party members have a fixed class. Some playable characters have an alternative class that are a sort of combination of two classes, for example Doug's class is an Alternative Blast Fencer, noted "Blast Fencer +" in-game. Cross is the only party member who can select a class.

Cross can freely switch her/his class as the game progresses. Classes are necessary in order to learn different Arts. When the initial Class, Drifter, reaches the rank 10, it becomes possible to change it, and to choose and develop one of the next three classes branches. Drifter gives access to the three first level classes (Striker, Commando and Enforcer). 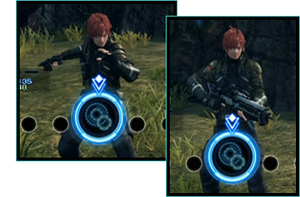 As the origin of all classes, Drifter allows to learn some Arts in a very balanced way. The basic equipped Weapons are Knives and Assault Rifles.

Retrieved from "https://xenoblade.fandom.com/wiki/Class?oldid=439534"
Community content is available under CC-BY-SA unless otherwise noted.