Right side of Bionis' waist

Colony 6 is an area in Xenoblade Chronicles. It is a Homs settlement positioned on the waist of Bionis, above Bionis' Leg. The Supply Road landmark connects to Bionis' Leg, and the Misty Path landmark leads to the entrance of Satorl Marsh. The colony is the home of Sharla and her brother Juju.

Prior to the raid on Colony 9, Colony 6 was attacked by Mechon. Led by Xord, they quickly overran the settlement, driving Sharla and Juju to escape along with the elderly Homs and those unable to fight, while the Defense Force covered their escape.

While Shulk and Sharla do set out for Colony 6, it actually plays less of a role in the overall storyline, as they confront Xord in the Ether Mine. The mine is placed directly beneath Colony 6.

However, when they return after the battle with Xord, Metal Face and his minions ambush them. At this point Dunban joins the party, with Dickson bringing up the rear. Despite even numbers on both sides, Metal Face escapes after a Telethia attacks.

Afterwards, Juju will ask Shulk to help rebuild Colony 6. The party will have to retrieve supplies and money for the reconstruction and send new immigrants to repopulate the region. The fledgling colony will also be attacked from time to time and the party has to fend off the attackers before the colony resumes its normal functions.

The party later escape Mechonis by flying the Junks out (after which Mechonis areas become inaccessible), and they head to Colony 6. After a battle event on the deck of the ship, they eventually land at Colony 6, and from then on the Junks can be found in both Colony 6 and the Hidden Machina Village. The Junks' Colony 6 resting spot is near the Reconstruction HQ landmark, and Junks' icon will appear on the map from this point on.

After Bionis awakens, the party is attacked at the gates of Colony 6 by a squad of Telethia. The Telethia will attack again while the party is in Prison Island, but they are defeated by Juju and Otharon with the aid of the Face Mechon.

It should be noted that the Junks icon is neither a location nor a landmark, and thus the Colony 6 map can be completed without it.

The rank of crystals obtained from these deposits begins at two and increases up to rank five as the Nature level of Colony 6 is increased.

Shops are added to Colony 6 at various stages of reconstruction. 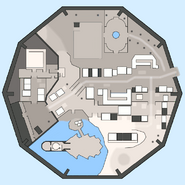