Corinne is a character in Xenoblade Chronicles 2. She raised Rex, who calls her "Auntie Corinne". She can be found at Corinne's House on Fonsett Island in the Leftherian Archipelago.

As a toddler, Rex's family wandered into the Leftherian Archipelago, having gone through an unknown life threatening experience. His mother died shortly after getting him to the town's border, and his father died outside the village. Corinne took it upon herself to raise Rex as if he were her own child.

According to Gramps in her youth, Corinne was very similar to Nia; a very hardheaded and determined young woman. Filled with lots of self confidence and bravery, she had attempted to enter the Spirit Crucible Elpys on her own without the aid of a Blade. However once she reached the bridge she ended up turning back for reasons unknown; Gramps assumes it was likely the realization of what could happen to her being down there by herself. 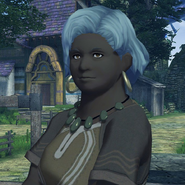 Corinne with a young Rex
Español
Community content is available under CC-BY-SA unless otherwise noted.
Advertisement