Cross (クロス, Kurosu) is the default name used on this wiki to designate the Avatar, the customizable playable character of Xenoblade Chronicles X. They are created by the player and exists through the choices made during the game. They are sometimes referred to by other characters as "Rook".

Cross was one of the crew from an unspecified sector of the White Whale. Cross landed on Mira by evacuating the ship in a lifepod. Two months later, Cross's lifepod is discovered in Starfall Basin, and they are woken up from stasis by Elma. Cross is the only survivor in the area, and has no memory of Earth or the White Whale. Elma brings Cross to New Los Angeles, and they become a member of the private military organization BLADE.

Cross is highly customizable, allowing players to choose the character's name, gender, face type, hairstyle and color, eye shape and color, voice, skin, etc. Player control can be switched from Cross to another party member, but Cross can never be removed from the party. Cross is the only character who can select their Division affiliation, as well as a Class, which decides the weapons that they can wield. By completing Affinity Missions, Cross can learn other characters' Signature Arts. Cross's signature arts are Flame Grenade, Infuriate, Recuperate, Chrome Armor and Slit Edge.

By starting the game, the player creates an Avatar, a kind of alter ego. There are various features to combine in order to create the Avatar such as the name, the gender, the body size (and the bust size for a woman in the Japanese versions), the face type, the skin (skin color, freckles, cheeks, scars, moles), the hairstyle and hair color, the eyes shapes and colors, a make-up (eye shadow color, lip color, face paint), as well as the voice.

The player can alter the appearance (but not the name) of their Avatar upon completion of the following missions:

The male or female voice can be chosen amongst several voice type such as the tone or the accent.

Official art of a male Cross

Official art of a female Cross 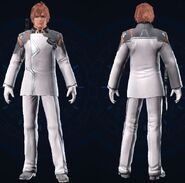 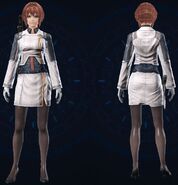 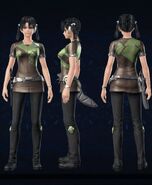 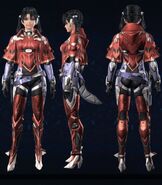 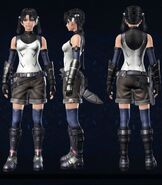