The Empire of Mor Ardain (Japanese: スペルビア帝国, Superubia Teikoku, lit. Superbia Empire) is a Nation in Xenoblade Chronicles 2. It is a militaristic empire from the Titan Mor Ardain. They are led by the Emperor Niall. They control Titans through mechanical means, and bring heavy armaments as they annex other lands in a bid to save their own from ruin and depletion. In particular, they use geothermal energy from steam turbine towers allowing them to maintain an advanced mechanical technology. The Empire occupies other regions of Alrest with bases such as Torigoth Relay Base in Gormott Province and the Ardainian Garrison in Temperantia. The capital of the Empire is Alba Cavanich.

Creation of the empire

According to Ashala's grandmother, Ephem, the first Ardainian emperor, journeyed across the lands to build up his own legacy. Accompanied by a certain Carraig, he found the Titan and founded Mor Ardain. Ephem's son followed in his father's footsteps and unified the nearby nations creating the empire. Items that bear his name, such as Emperor Ephem's War and Copper Ephem Statues, are sold in Alba Cavanich.

The Empire of Mor Ardain is a long-standing empire on the Titan of the same name. The empire is a rising power at the time of the Aegis War, under Emperor Hugo. They form a military alliance with the Indoline Praetorium, and as a result, attract widespread suspicion following the destruction of Coeia.

After the Aegis War

Around 50 years prior to the reawakening of the Aegis, Mor Ardain assimilated Gormott into their Empire, as the Ardainian Titan has grown old and may not sustain life for much longer. At the beginning of the game, the Empire and the Kingdom of Uraya are on the brink of war.

Bana informs Consul Dughall in Torigoth that Rex and the Aegis, Pyra, have arrived in Gormott, and Dughall attempts to capture Pyra and sell her back to Bana for a large sum of money. Special Inquisitor Mòrag, and her Blade, Brighid, arrive in Torigoth and formulate a plan to capture the Aegis. Dughall is defeated in battle, and the party manages to escape from Mòrag and Brighid. Mòrag lets them escape Torigoth, stating that they will cross paths again.

Jin later invades an Ardainian transport vessel, defeats most of the soldiers on board, and steals the large cargo of Core Crystals. Mòrag receives word of this from her brother, Emperor Niall, and his Blade Aegaeon. Following this event, the pro-war faction of the Ardainian senate votes to resume excavation of the Judicium Titan weapons in Temperantia.

The party finds themselves traveling to Alba Cavanich on route to Indol. One night, Lila is spotted attacking the city. Ardainian soldiers later spot Poppi with the party and mistake her for Lila. Mòrag and Brighid fight the party again before Acting Chairman Niranira, working for Argentum's Intelligence Division, reveals that Poppi is not the culprit. Mòrag and the party agree on a truce to find the true culprit.

The Garfont Mercenaries discover that Lila is hiding out in the Old Factory; Mòrag also shares a report that a Nopon merchant is involved, which Rex deduces to be Chairman Bana. After a brief squabble with Zeke, they invade the Old Factory, where they find Tora's father, Tatazo, forcibly working for Muimui and Bana to create Artificial Blades. Bana orders Lila to attack the party, but Lila goes back on his orders and begins listening to Tatazo, her true "masterpon."

Bana and Muimui then go to activate their ultimate artificial blade, Rosa. However, Lila helps upgrade Poppi's ether furnace, and Poppi takes on the new form of Poppi QT. With Poppi's new form, they defeat Rosa. Bana attempts to escape from Bulge Harbor, but Rex catches up to him. However, Mikhail and Patroka, members of Torna, arrive on the scene and reveal that Torna is working with Bana. Mòrag and Brighid arrive to assist the party takes them down, and Fan la Norne arrives to prevent Patroka from unleashing her true power. The two, along with Bana, manage to escape on the Monoceros. Mòrag and Brighid then join the party as they travel to Indol.

Both Mor Ardain and Uraya have troops stationed in Temperantia, and Mor Ardain has begun excavating Titan Weapons from Judicium. In order to buy Torna some time, Jin infiltrates the Titan Weapon and orders it to attack Urayan forces. After hearing from Senator Roderich that they did not issue the attack, the party manages to stop the Titan Weapon, though Fan la Norne is killed by Jin soon afterward. Indol intervenes in Temperantia and prevents a full-scale war from breaking out.

A Ruler's Congress is held in Indol; Praetor Amalthus, Emperor Niall, Inquisitor Mòrag, Queen Raqura, Acting Chairman Niranira, His Highness the Crown Prince Ozychlyrus "Zeke" Brounev Tantal, and the Aegis Mythra all attend. Despite the Osirian treaty, which was signed 350 years ago and stated the Praetorium cannot intervene in times of war, the meeting commences. Niall states that Mor Ardain did not issue the attack, and Mythra and Zeke confirm it was the work of Torna and the other Aegis Malos. All parties decide to lift the ban preventing access to the World Tree. As a part of the treaty signed, Mor Ardain must end all military operations in Temperantia involving the Titan Weapons, and Uraya gains surveying rights to the area.

After the summit, Bana arrives with his new Artifical Blade Giga Rosa; he plans to assassinate Queen Raqura and Emperor Niall and thus start a war so that he can sell weapons and profit. He is subdued by the party, and Mòrag announces she will take him into custody. Before she can do so, Bana activates a self-destruct feature on Giga Rosa, which fatally hits Niall. Dromarch later distracts the others so that Nia can heal Niall back to life. Afterward, Niall resumes his role as Emperor and tells Mòrag to accompany Rex on his quest. Bana is captured by the Empire and punished to work on Argentum's generators.

Later on, it is revealed that Mor Ardain is quickly becoming uninhabitable, as sections are closed off and the ether temperature is rising. A soldier recommends to Niall that they move the capital to Gormott, but Niall refuses to do so on such short notice.

As Amalthus is unable to use Mythra's power to destroy Torna, he summons the Mor Ardainian titan to fire a large energy blast at the World Tree. As the Titan begins to lose large amounts of energy, Niall orders to begin evacuations with all available ships. With the help of Poppi, Rex and Mythra eventually attack Indol and prevent Amalthus from controlling Blades or Titans any further.

When Malos orders the Artifices to attack Alrest, Emperor Niall is seen on the streets of Alba Cavanich, guiding people to safety. Before he disappears, the Architect gives new orders to the Titans, including Mor Ardain, to merge with a large landmass beyond Alrest.

Both the Japanese and English names allude to one of the seven deadly sins, pride, the former using the Latin word and the latter Scottish Gaelic word mór-àrdan.

The emblem of the Empire of Mor Ardain 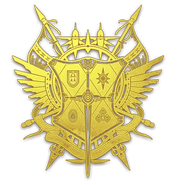