For other uses, see Gormott (disambiguation).

Gormott (Japanese: グーラ, Gūra, Gula; English dub: /ˈɡɔːrmɒt/) is a Titan in Xenoblade Chronicles 2 and Torna ~ The Golden Country. It is a large giraffe-like entity covered in lush green woodlands and plains. This titan was once an independent republic of the Gormotti people, but since conquest 50 years before the main story by the Empire of Mor Ardain, it is now known as Gormott Province. While exploring Gormott, its head and his dorsal fin can be viewed moving. Nature is abundant on Gormott, covered in lush plains and forests, and the accessible areas are affected by the movements of the Cloud Sea.

Gormott is still very fertile, which is why Mor Ardain desired it to become the new permanent home of the Ardainian people after their titan dies of natural causes. Even so, Gormott is already past its own prime with its harvests having steadily declined for many years, demonstrating that Gormott is no more immortal than Mor Ardain and that at some later time it too is expected to grow old, heat up, become barren and die. As the differences in geography between Gormott today and Gormott 500 years ago demonstrate, it has become a steadily more porous titan, with more of its Grandarbor branches rotting, hollowing and breaking.

Both the Japanese and English names allude to one of the seven deadly sins, gluttony, the former using the Latin word and the latter from the French word gourmand. 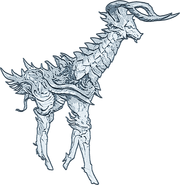 Add a photo to this gallery
Retrieved from "https://xenoblade.fandom.com/wiki/Gormott?oldid=442478"
Community content is available under CC-BY-SA unless otherwise noted.