Gormott (Japanese: グーラ, Gūra, lit. Gula) is a Nation in Torna ~ The Golden Country. This territory is home to the Gormotti people, and engaged in a political alliance with the Empire of Mor Ardain. Its capital is at White Chair.

During the Aegis War, Gormott was home to frequent skirmishes between Ardainian and Coeian forces.

Haze discovers that Lora's mother, Rynea, has been hiding out in Gormott. Accordingly, Lora travels to Gormott with Addam and his crew. Upon arriving at Torigoth, they find the entire village burned and destroyed. By venturing further into the village, they find Torigoth Cemetery. On one of the graves, Lora finds the same charm that she made for her mother when she was younger and learns of her mother's death.

As the group travels back into the village, Ardainian troops surround them and mistake them for the brigands who destroyed the village. Brighid then challenges them to a battle before Hugo and Aegaeon arrive and clear up the misconception. Lora and Haze stay behind in Torigoth while the rest of the group goes to the Ardainian flagship to discuss the next path forward. Here, Hugo reveals that the village was destroyed by rogue Coeian troops after the nation's demise.

As Lora and Haze decorate the graves, Gort and his mercenary band ambush the two. He plans to kill Lora to reclaim Jin as his own Blade. Just as the mercenaries begin to surround the two, Jin arrives on the scene, dispatches of most of the mercenaries, and incapacitates Gort as he makes an attempt on Lora's life, cutting off both his prosthetic arm and his remaining arm in the process. He refrains from killing him at Lora's request, and some Ardainian troops unsuccessfully attempt to capture him. Gort is later captured by the Indoline Praetorium. Afterward, the group travels to Aletta.

Gormott during the Aegis War appeared largely similar to its appearance in Xenoblade Chronicles 2, sharing largely the same topographical geography, with differences in the distribution of tree roots, areas of human development and moderate differences in animal life. The major port facility of the time was at Lascham Cove, with Torigoth Village being a smaller, out of the way settlement. Gormott was not yet under the control of the Empire of Mor Ardain, who would not annex it as Gormott Province until 450 years later.

In Torna ~ The Golden Country, only the region of Gormott corresponding to the future Upper Level - Right can be explored; the paths leading to would-be Lower Level and Upper Level - Left were obstructed by dense tree growth. In the accessible area:

Both the Japanese and English names allude to one of the seven deadly sins, gluttony; the former using the Latin word and the latter from the French word gourmand. 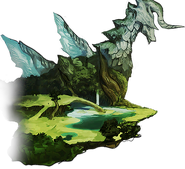 The in-game map of Gormott
Community content is available under CC-BY-SA unless otherwise noted.
Advertisement