"From "political aide" to "director general" in two weeks...At this rate, he'll be "emperor" by next month."
— Gwin

Gwin Evans (Japanese: グイン, Guin; English dub: /ˈɡwɪn ˈɛv.ənz/) is one of the eight main playable characters of Xenoblade Chronicles X. He is an Interceptor in BLADE, and was Elma and Irina's subordinate in the Unified Government Forces Special Vehicle Guidance Squad. He joined BLADE to honor his late friend Leon, and for his desire to protect Irina. Gwin is recruitable after Chapter 3.

Gwin is a human with light brown hair and blue eyes. He has a partial bang that covers the left side of his forehead, while his hair spikes upward on the other side.

Gwin has an honest personality, and a strong sense of justice. He possesses a youthful desire to do his best and constantly wants to become stronger, attributes which make him charming. He has a rather relaxed way of speaking as well, and is much more laid-back when compared to his superiors. It is also implied that he is attracted to Irina, and wishes to protect her.

At the end of the Affinity Mission Boot Camp, Gwin reveals that he was close friends with Leon, Irina's younger brother, who unfortunately was not among those selected to board the White Whale. He says that he joined BLADE in the hopes of someday becoming as strong as he was, and is inspired during the mission to change his goal to surpass him instead.

When not in the party, Gwin can be found as an NPC on Division Drive in the Administrative District of New Los Angeles.

Gwin can be recruited after Chapter 3.

Gwin's Class is Samurai Gunner. When he is first recruited, he is level 12 and rank 3. He wields a Longsword and an Assault Rifle. His two Signature Arts are Ultraslash (Longsword) and Grenade Blitz (Assault Rifle). He has three Skill slots. His class progression is as follows:

During the fourth battle of The Gauntlet, an opponent under the disguise as Gwin is fought at level 56 at the same place. However, the opponent's dialogue prior to the battle implies that he is not really Gwin, and immediately upon defeat, the opponent is revealed to actually be HT665: Erio, having disguised herself as Gwin. 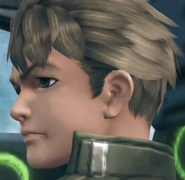