For the Nation, see Indoline Praetorium.

Indol (Japanese: アーケディア, Ākedia, Acēdia) is a Titan in Xenoblade Chronicles 2. It is ruled by the Indoline Praetorium, who worship and revere the Titan. It is a dragon-like Titan that flies above the Cloud Sea.

The time and place of birth of the Indol Titan is unknown, although it existed at a similar size five hundred years before the events of the main game. Although it moves around the World Tree in a similar manner to other Titans, it also acts under the direct control of Praetor Amalthus, seen initially when the Titan appears over Temperantia in order to prevent conflict between Ardainian and Urayan forces. It then returns to its usual movement.

Later, when the party climb the World Tree, Indol appears and is used as a conduit for Amalthus' powers, allowing him to control the other great Titans. Indol fires large lasers from its wings at the World Tree and is attacked by the Marsanes, which has transformed into a large mech.

Later on during Chapter 8 the party will no longer return here and onwards. Then during Chapter 9 Mythra and Rex destroy its amp towers to keep Amalthus from forcing the other Titans kill each other. When Amalthus tries to take revenge, Mikhail and the Marsanes block Indol's Ether cannons, grabs it by its neck and smashes the Titan into the World Tree. Indol tries to fire an Ether blast from its mouth, only for the Marsanes to charge at it it fist first, and the subsequent explosion destroys both of them in the process. Indol is killed and sinks into the Cloud Sea, but the people that live there evacuate there and are scattered on some Titans around Alrest.

Both the Japanese and English names allude to one of the seven deadly sins, sloth, the former using the Latin word and the latter from indolence. 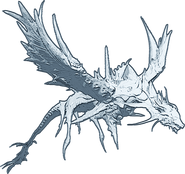 Indol fights the Marsanes
Add a photo to this gallery
Retrieved from "https://xenoblade.fandom.com/wiki/Indol?oldid=465687"
Community content is available under CC-BY-SA unless otherwise noted.