Xenoblade Wiki
Register
Don't have an account?
Sign In
Advertisement
in: Pages with spoilers, XC3 stubs, XC3 Heroes,
and 2 more

Juniper (Japanese: ユズリハ, Yuzuriha) is a character in Xenoblade Chronicles 3.

They are also known as Ghostbow Juniper (Japanese: 儚弦のユズリハ). Juniper is one of the Heroes who joins Noah and his friends.[3] They belong to the nation of Agnus, but usually live quietly in the forest. They are a companionable person and seem to be trusted by their colony mates. Juniper is very agile and can move easily on trees and thin ropes.[4][5]

Juniper's initial Class is the Attacker class Stalker. They wield a bow and specialize in attacking enemies' blind spots for a stealthy elimination.[6][7]

Junipers are a family of coniferous trees. Their Japanese name ユズリハ (Yuzuriha) is the common name for Daphniphyllum macropodum, a shrub or small tree found in China, Japan and Korea. The timber is used in China in construction and furniture making. It is grown as an ornamental plant, chiefly for its foliage. 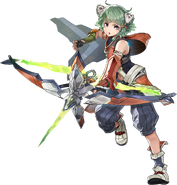 Same Taion's talk in the French version, using the noun "opponent/adversary" in the masculine/neutral form.

Same Taion's talk in the French version, but Taion deals with the group (thus plural), not Juniper only

Juniper being recruited in the French version considering Juniper a female character ("combattante" meaning Attacker in the feminine form).