The Kingdom of Uraya (Japanese: インヴィディア烈王国, Invidia Retsu ōkoku, lit. The violent Kingdom of Invidia) is a Nation in Xenoblade Chronicles 2. It is a force that rules from within the Titan Uraya. The capital is Fonsa Myma and Queen Raqura reigns over the nation. It stands on the brink of war with the Empire of Mor Ardain over territorial disputes.

The Urayans deeply respect nature and have advanced biotechnology. A vast cave spreads throughout Uraya's body, and faint sunlight fills the place from the back of the Titan during the day. At night, plant life emits pink and orange light, creating a beautiful shimmery scenery.

Uraya's past is brought up in Adenine's Heart-to-Heart, "Walking Encyclopedia", and the quest Marvelous Mercenaries. The Kingdom of Uraya was once governed by nine noble houses, with the House of Envia commanding the most power and Selosia being second. Other Houses include the House of Paronet and the House of Gaselart. In an event known as the War of Succession, the leader of Envia, a man names Hannes, died of mysterious circumstances. His eldest son, Giani, took over the Duchy, but he died of illness shortly afterward. Philip, Giani's younger brother, died of illness before he could claim the throne. The Duchy of Envia fell from power, and the Duchy of Selosia united the remaining six houses and formed the modern Kingdom of Uraya. Rumors state that Hannes had a child with a woman in Gormott and that his true descendants may be living in Gormott; this claim is what sparks the events of the quest Marvelous Mercenaries, where an unnamed Ardainian elite tried to take advantage of the succession crisis.

During the Aegis War, Addam was knighted as Mythra's Driver at the Olethro Playhouse. He then formed a militia in Uraya before leaving to better grasp Mythra's power. The Kingdom of Uraya eventually took control of Addam's militia and sends them off to Aletta.

Around the time of the Aegis's reawakening, Uraya and Mor Ardain are at the brink of war. Salvaging for weapons grows in demand, though Rex refuses to partake in it. Rex and the others find themselves traveling through Uraya after narrowly avoiding a confrontation with Ophion. Here, they meet Vandham, the leader of the Garfont Mercenaries. Vandham takes them to the capital, Fonsa Myma, where his old friend Cole resides. Vandham hopes Cole can help Rex on his quest to get to Elysium.

The rising tensions lead to the Kingdom of Uraya issuing rations; some soldiers are seen forcibly taking food from civilians. Many warships are seen docked in Fonsa Myma. The group battles Malos and Akhos at the Olethro Playhouse, where Vandham is killed and Mythra reawakens.

It is later revealed that Uraya and Mor Ardain both have troops stationed in Temperantia. Jin, the leader of Torna, hijacks one of Mor Ardain's Judicium Titan Weapons and attacks Urayan forces in the area. The rampaging Titan Weapon continues to attack Urayan forces until Rex and company shut it down. Indol intervenes in Temperantia before war breaks out, and a cease-fire is declared. At the Ruler's Congress, Queen Raqura receives word that Mor Ardain did not issue the attack, and that it was the work of Torna. The treaty signed at the Congress state that Mor Ardain had to halt all military developments in Temperantia and Uraya would gain surveying rights in the area.

Later, Uraya is forcibly summoned by Amalthus to attack the World Tree and prevent Torna from reaching Elysium. Under Amalthus, the Urayan Titan releases large blasts of ether at the Tree. Amalthus loses control over Uraya when Rex and Mythra use Siren's power to destroy Indol's amplification towers.

Before he disappears, the Architect gives the Titans, including Uraya, new orders to merge with a new landmass outside of Alrest.

Both the Japanese and English names allude to one of the seven deadly sins, envy. The Japanese name comes the Latin word, whereas the English is derived from a kun'yomi reading of the kanji 羨, uraya, as part of the verb 羨む (urayamu, "to envy") or the adjective 羨ましい (urayamashii, "envious"). 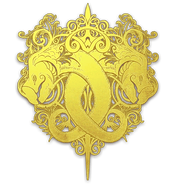 The emblem of the Kingdom of Uraya

The Kingdom of Uraya seen in Chapter 3's title screen