Kirsty is a NPC in Xenoblade Chronicles X. She is the FrontierNav operations manager.

Kirsty can be found near the Mimeosome Maintenance Center in the Administrative District of New Los Angeles.

In The Probe-fessional, she teaches Cross the basics of installing data probes and how to chain them together for the FrontierNav grid. In Planetary Pioneer (Part I), Kirsty explains that the majority of the resources had been used up since the White Whale crashed--she asks for the installation of additional data probes in Primordia in order to increase the miranium. In Planetary Pioneer (Part II), Kirsty asks Cross to retrieve several materials for Skell maintenance as well as a data unit in Noctilum. She reveals that the data unit contains classified information from a special project that she and her colleagues were involved in. By the start of Planetary Pioneer (Part III), as New Los Angeles gained new xenoform residents, the city experienced exponential growth in terms of technology and trade. As a result, the miranium consumption spiked to an alarming degree--Kirsty asks Cross to expand the FrontierNav grid further into Oblivia and to collect another data unit.

In Planetary Pioneer (Part IV), Kirsty once again sends Cross out to Sylvalum to further expand the FrontierNav system--she promises to tell Cross more about the classified data units after completing the mission. Once the assignment is completed, she reveals that when the Earthlife Colonization Project began, the government had to figure out a way to gather resources and intelligence on a new planet. A special team with the code name "Frontier" was assembled to tackle the issue. Kirsty was one of the many researchers involved. She said that even after the White Whale took off, they kept working on the project without much food or sleep. After a while, a working version of what would come to be FrontierNav was completed. When the Ganglion attacked the White Whale, their lab came under fire--her team members died in the attack while the data itself was wrecked as it crashed onto Mira. Kirsty suspects that she is the only surviving member of the project. She said she had no luck finding her colleagues through FrontierNav. She reveals that the five data units contains information on a top-secret, second-generation version of FrontierNav. Even after the system was complete, the rest of the team continued to pursue their research voluntarily. Kirsty believes Nagi is unaware of the project--even she herself does not know the finer details. After retrieving the final data unit in Cauldros during Planetary Pioneer (Part V), Kirsty thanks Cross for helping her. However, she brings up that all of the recovered data is encrypted and that no one is able to crack it.

In New Frontier, Kirsty has finished analyzing the data units. She discovered that her team's research was a secret to the former heads and believes that they never told her because of potential implications for her career. Kirsty wants to pick up where her colleagues left off so she can see this through to implementation. She also discovered that the aim of the second-generation FrontierNav is to link every planet in the universe to the system--essentially sharing information and resources freely among them all. The schematic starts with the planets of the original solar system, and proposes linking to newly discovered planets from there--including Mira. Kirsty hopes to bring the project alive even if she doesn't see it come to fruition within her lifetime. After Cross gathers materials for her, she asks if they had any dealings with Tobias. She thinks of him as a selfish jerk who only uses the FrontierNav as a tool to sate his own greed, however, she realizes that he is the key to the sixth data unit. She asks Cross to negotiate with him in her stead since they do not get along.

Kirsty is in total shock when she learns that Tobias was involved in the network development. She could not believe that someone so selfish and greedy had a hand in the project. Tobias expressed serious doubts about BLADE HQ or the provisional government funding Kirsty's project--he steps in and surprises Kirsty by transferring all the money he accrued into her personal account. Kirsty is left completely dumbfounded. 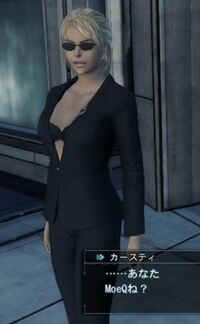 Retrieved from "https://xenoblade.fandom.com/wiki/Kirsty?oldid=437863"
Community content is available under CC-BY-SA unless otherwise noted.