Lila (Japanese: キク, Kiku) is an artificial Blade in Xenoblade Chronicles 2. She was built by Professor Soosoo and Professor Tatazo, Tora's grandfather and father, before Soosoo was apparently killed and Tatazo disappeared. She views Poppi as her younger sister.

Since neither Professor Soosoo nor Professor Tatazo nor Tora could not bond with a Blade, they began work on an artificial Blade known as Lila. However, before Lila could be completed, their laboratory came under attack, leading to the apparent death of Soosoo. Tatazo gave Tora Lila's blueprints, and Tora fled to Torigoth, where he improved on them to create Poppi.

Lila is first seen by the party in Alba Cavanich, the capital of the Empire of Mor Ardain, where she escapes after a fight with some Ardainian Soldiers. After the party catches up to her, she detects Poppi's Ether furnace and a battle between her and the party begins, after which she escapes once more. The Ardainian soldiers mistake Poppi for Lila, and Mòrag and Brighid battle the party before they call a truce to find Lila. Tora deduces that Tatazo must be alive, as he is the only one who could have completed Lila.

The Garfont Mercenaries locate Lila in the Old Factory. The party arrives at the factory to discover that Tatazo was forced to complete Lila and build more artificial Blades by Chairman Bana and Muimui. After fighting the party under the control of Bana, she is able to destroy the control device that Bana and Muimui had placed in her. She asks Poppi to save the other artificial Blades being created in the factory before using her Ether furnace to upgrade Poppi α into Poppi QT.

Tatazo can be found at Tora's House in Torigoth repairing Lila, and later both Tatazo and a fully functioning Lila will assist Tora in preparation of Poppi QTπ.

Lila is fought twice as an Artificial Blade boss in the Empire of Mor Ardain. She is first fought at level 29 at the Kedeigh Gate of Alba Cavanich, and later at level 31 at the Central Control Room of the Old Factory. This enemy drops no items. 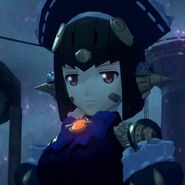