Lin Lee Koo (Japanese: リンリー・クー, Rinrī Kū, Lynlee Ku; English dub: /ˈlɪn ˈliː ˈkuː/), better known by her nickname Lin, is one of the eight main playable characters of Xenoblade Chronicles X. She is the narrator of the main story's prologue and epilogue. She is called Linly (English dub: /ˈlɪn.li/) by Tatsu.

Lin is the second scripted party member to be revealed after Elma. She is described as a genius and is an expert engineer at BLADE. She is a member of the Outfitters Division, involved in the development of the Skells. Lin joins the party after she is met during Chapter 1.

Lin is an energetic young girl, deeply fascinated by Skells and anything mechanical. She is a very intelligent individual, able to drive and design equipment despite her age and appearance. She respects Elma despite sometimes teasing her and considers her very cool. She and Tatsu become close quickly upon meeting, and interact like siblings. They constantly bicker and tease each other, often due to Lin's jokes about cooking Tatsu due to him resembling a potato. Lin is also close to and protective of Lao despite him being initially unaware that she was brought onto the White Whale as a result of her own brilliance rather than her parents' reputation.

Lin is a thirteen year old human girl. She has black hair cut in a chin-length bob, black eyes, and pale skin. Her bangs extend across her forehead and reach her eyebrows. She wears two hairpins stylized as Monados on the each side of her head. Her initial armor consists of white and black Sakuraba Industries Light Wear.

If she is not in the party, Lin can be found in the BLADE Barracks cooking food, with Tatsu next to her. She can join the party if asked by the lead party member. If Lin is in the party, Tatsu automatically joins as a guest. Similarly, if Lin leaves the party, so will Tatsu.

Lin can be recruited after meeting her in Chapter 1.

The Class of Lin is Shield Trooper. When she is first recruited, she is level 5 and rank 3. She wields a Shield and a Gatling Gun. Her two Signature Arts are Fire Carnival (Gatling Gun) and Drum Roll (Shield). She has three skill slots. Her class progression is as follows:

Lin is first seen shortly after Cross enters New Los Angeles for the first time. Cross and Elma witness Doug trying to pilot a malfunctioning Skell, before crashing it nearby. Lin is then seen driving over to check on the Skell's situation. After analyzing the Skell, Lin welcomes Elma back from her quest and introduces herself to Cross. She then joins the party, accompanying Cross and Elma for the entire plot.

Lin is an obtainable spirit in Super Smash Bros. Ultimate. She is a Novice support spirit, grab type. The battle takes place at Shadow Moses Island (w/ hazards). Lin is represented by Daisy in her black dress. Accompanying her is a light blue alt. Mega Man and a light blue alt. Rob. The battle conditions are that you must defeat Daisy to win and that Daisy starts with a Drill. As a spirit, she is a 1-slot, giving the ability of Energy Shot Resist. 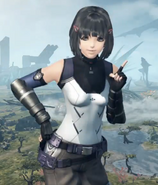 Lin piloting a Skell with Tatsu on the left 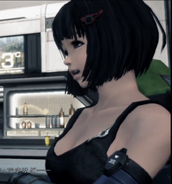