Xenoblade Wiki
Register
Don't have an account?
Sign In
Advertisement
in: Pages with spoilers, Mòrag, Drivers,
and 11 more
English

View source
watch 01:12
Who is Mòrag?
Do you like this video?
Play Sound

"I get the feeling that, if I stay near that boy, I might bear witness to something quite extraordinary."
— Mòrag, about Rex

Mòrag Ladair (Japanese: メレフ・ラハット, Merefu Rahatto, Meleph) is a main playable character in Xenoblade Chronicles 2. She is the Special Inquisitor of the Empire of Mor Ardain. She is a Driver and is accompanied by her Blade, Brighid. She is called "the Flamebringer" (or "the Radiant Young Noblewoman of Flame" 炎の輝公子, Honō no ki kōshi in the Japanese release) and is known as the most powerful Driver in the Empire, serving Emperor Niall, her adopted younger brother and biological cousin.

She joins the party during the battle against Patroka and Mikhail in Chapter 4. Upon joining the party, Mòrag is equipped with common Spring Shoes.

As the leader of the Ardainian military, Mòrag is strong-willed and dedicated, and values the safety of her country and people above anything else. She rarely loses her temper and manages to stay cool-headed even in the most dangerous of situations.

Despite her abilities, Mòrag is shown to struggle to connect with her younger cousin due to the difference in their positions. Due to her mannerisms and clothing, she is sometimes mistaken for a man.

Mòrag is a young woman with long black hair tied in a bun (usually hidden under her hat), brown eyes, and fair skin. She has an average build. Mòrag wears a dark blue and white military uniform with white gloves. It has a half-cape and a hat with a gold visor with the Ardainian crest upon it, signalling her position as Special Inquisitor. She wears gold armor on her shoulder, hips, knees and feet.

Mòrag has three alternate costumes which can be obtained as DLC accessories via Challenge Battle Mode. These are:

Mòrag was born from the royal family of Mor Ardain to Lord Eadraig and was raised by the father of her younger cousin, Niall, alongside him in Gormott Province. She was groomed to be emperor until Niall's birth. Upon the old Emperor's passing Niall was made emperor very young, while Mòrag trained in the art of war to become the new Special Inquisitor. As Special Inquisitor she bonded with Brighid, one of the two Jewels of the Empire. For the following years, Mòrag's ability and strength as a Driver gained her the title of "Flamebringer".

Mòrag is first seen arriving in Torigoth after reports that the Aegis had been seen there. Consul Dughall takes her to interrogate Nia, and Mòrag learns the names of Rex and Pyra. She coordinates false rumors that Nia and Dromarch are to be executed to lure the Aegis out to rescue Nia. Though upon their meeting Rex accuses her of wanting to use Pyra's power for herself, Mòrag claims that she must capture Pyra to prevent another conflict on the scale of the Aegis War. Rex and Poppi knock down a water tower to weaken Brighid, allowing them to escape the city. Mòrag feels offended that Rex held back on her in battle as he deliberately missed hitting her with Burning Sword. She resolves to not chase after them, insisting that their paths will cross again.

Back in Mor Ardain, Emperor Niall and Aegaeon meet with Mòrag and Brighid. Mòrag apologizes for not capturing the Aegis, though Niall dismisses this. Mòrag learns that Jin infiltrated an Ardainian ship and stole a large cargo of Core Crystals. After this, the Ardainian Senate decide to resume excavating the Titan Weapons in Temperantia.

Mòrag later appears in Alba Cavanich. A soldier mistakes Poppi for Lila, and Mòrag engages in combat with Rex and company before Niranira comes out and testifies that Poppi is not the culprit. Mòrag agrees to a truce until Lila is apprehended. After it is discovered that Lila is hiding out in the Old Factory, Mòrag reveals reports that a Nopon merchant is working there, who Rex assumes to be Bana. Rex, Nia, and Tora's party go to the factory to investigate. After an encounter with Bana and the terrorist group Torna, Morag joins the party to help them fight Patroka and Mikhail. However these two escape alongside Bana on the Monoceros.

Mòrag joins the party from here en route to the Indoline Praetorium as a representative of the Empire. She admits that upon seeing Mythra, she is curious to see what Addam's Blade is capable of, and thus is not trying to stop the party. After learning from Praetor Amalthus that the Mor Ardainian Titan Weapon has advanced on Urayan forces, Mòrag and Brighid leave to investigate the situation. She confronts Senator Roderich, leader of the pro-war faction of the Senate; while he does not agree with Niall's pacifist approach, he did not issue the attack, and the party deduces that Jin ordered the attack to destabilize Mor Ardain's relations with the Kingdom of Uraya. She joins the party as they journey to Temperantia, and with the help of Fan la Norne, they are able to stop the Titan Weapon, although Fan la Norne is killed by Jin.

Mòrag then attends the Rulers Congress in Indol alongside Emperor Niall, Argentum Acting Chairman Niranira, Urayan Queen Raqura, His Highness the Crown Prince Ozychlyrus "Zeke" Brounev Tantal, and the Aegis Mythra. She provides eyewitness accounts proving that Mor Ardain did not issue the attack and that it was the work of Torna.

She helps the party again in Indol, where Bana plans to use Giga Rosa to kill Raqura and Niall to start a war for profit. They defeat Bana, but he activates a self destruct feature that fatally wounds Niall. Mòrag is distraught by her brother's apparent death, but while Dromarch draws the party away for secrecy, Nia uses Blade powers to revive Niall. Afterwards, Mòrag is loathe to leave Niall's side, but Niall insists that she accompany Rex on his travels to Elysium. Niall also gives her Aegaeon's Core Crystal, as he believes he is unfit to be a Driver. Mòrag becomes a permanent party member, and accompanies Rex for the rest of his journey.

These are Mòrag's Idea Stats upon joining the party.

These are Mòrag's default Blades obtained by progressing through the game's main story. These Blades are exclusive to Mòrag and later Rex, but cannot be used by anyone else.

New weapons and Driver Arts are obtainable upon New Game Plus, after finishing the game and installing Patch (Ver.1.3.0).

The following weapons are exclusive to the Expansion Pass.

Mòrag is fought as a boss three times during the game.

She is first encountered at level 15 at the Torigoth's Relay Base in the Gormott Province (Chapter 2).

Mòrag is later fought at level 31 in Alba Cavanich at Kedeigh Gate in the Empire of Mor Ardain, accompanied by three Ardainian Soldiers (Chapter 4).

She is battled one final time at the First Low Orbit Station, while Rex is the only playable character (Chapter 10).

During her battles Mòrag fights alongside Brighid, who increases her agility by 15%.

Mòrag is one of the characters who can appear on the Super Smash Bros. Ultimate DLC stage, Cloud Sea of Alrest, where she may be present in the background alongside Brighid. Mòrag also makes an appearance as a Spirit available on the Spirit Board as well as in the Adventure Mode's World of Light. She is represented by a puppet fighter of Lucina assisted by a minion fighter of Palutena, and the stage is engulfed in lava during the battle. 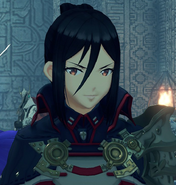 Mòrag with her hat off