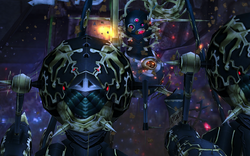 Mechon (Japanese: 機神兵, Kishinhei, lit. Machine-God Soldiers, Mechonis Soldiers; English dub: /ˈmɛkɒn/) are a "race" of mechanical beings who reside on the giant Mechonis in Xenoblade Chronicles, and are constantly at war with the Homs on Bionis. It is unclear what their overall intentions are, but they are a serious threat to anyone unable to wield the Monado or an anti-Mechon weapon, as Mechon are impervious to almost all attacks.

While Mechon come in a variety of shapes and sizes, they all generally are comprised of dark blue and gold metal armor, with visible working parts beneath (the blue being so dark as to appear nearly black in many cases). They also all have glowing red lights in place of eyes. While at first glance, some Mechon appear to be quite graceful in their movements, the majority are quite clunky and only able to move in jerky movements. Larger Mechon are more resilient to damage.

With the exception of several Story-Exclusive variants, a Mechon's "ten-digit" number indicates its size, shape, and power. 30-series Mechon are small aerial enemies and have low stats. 40-series Mechon are small four-legged Mechon with similar stats to the 30-series. 50-series Mechon are slightly more than half the height of a man and are characterized by curved claws that are fairly large relative to their body. 60-series Mechon are the height of a large man, bear cone-shaped "heads", and have medium sized stats. The 70-series are characterized by tentacles and lack of an obvious "front". The 80-series are significantly taller than a Homs, are the most humanoid series, and have fairly high stats. 90-series Mechon are extremely large, possess large pincers, and are often several levels above surrounding enemies. The rare 100-series, found only in Sword Valley and in the Central Factory, are the size of buildings and are the most powerful enemies in their areas stats wise.

In addition to numbered Mechon series, there are also the Offensive series (aerial Mechon with angel-like wings), the Defensive series (aerial Mechon with smaller, bulkier bodies and a pair of large pincers), the Exterminator series (notable for large metal rod-like protrusions), and Face Mechon (see below). There are also two Mechon that do not belong in any series: The Apocrypha Generator (a large spherical Mechon) and the Ancient Daedala (which closely resembles the 60-series but is comparable in size to the 100-series).

The many types of Mechon are listed below.

A sub-set of Mechon, Faced Mechon are so named due to the fact that they possess stylized faces. Other Mechon simply have seemingly randomized arrays of red lights for eyes. Faced Mechon are immune to the effects of the Monado; some believe this to be an effect of all Faced Mechon having modified Homs inside as pilots, with the exception of Gold Face. They are still vulnerable if Toppled. Pilots have the ability to dismount their Mechon at will. But Homs pilots ordinarily cannot survive outside their Mechon for long, because they have an altered immune system and several organs removed for integration with the Mechon. The types of weapons used by non-Mass-Produced Faces correspond to the ones used by their pilots. Faced Mechon also share a unique ability to transform into jets and fly. Most Faced Mechon are referred to as their main body color. Below is a list of Faced Mechon featured in Xenoblade Chronicles.

All these Faced Mechon are bosses except Face Nemesis, which appears as a story exclusive enemy; Temporal Gawain, which is an Unique Monster; and Mass-Produced Faces, which are minor enemies (a story exclusive and two normal versions).

This resistance does not apply to the Monado, which is able to do physical damage to Mechon. The Monado can also cast an Enchant aura on nearby weapons, enabling them to likewise inflict physical damage on Mechon.

Most Mechon have no resistance to ether-based attacks.

Mechon powers, abilities, and debuff immunities tend to be specific to each model, so the Mechon's model number denotes its individual abilities. For example the M30-series all possess limited flight abilities and have the Energy Shot art.

Larger Mechon (such as the M72 and M82 models) are shown to use their flower-bud appendage to ingest Homs and devour them, albeit only in cutscenes.

In Sword Valley, many broken, copper-coloured Mechon can be seen. They have either rusted or have been exposed to a large amount of ether. The second theory is more likely, as some Mechon in the lower parts of the Ether Mines share this colouration.

Retrieved from "https://xenoblade.fandom.com/wiki/Mechon?oldid=427219"
Community content is available under CC-BY-SA unless otherwise noted.