"Look at you; worthless without the Monado. Isn't that right, Dunban!"
— Metal Face

Metal Face is vicious and sadistic, relishing the pain and suffering of others. It is never made clear whether it has an appetite along the lines of Xord (or if it even eats for that matter). He is also quite cunning but very cowardly; if he feels personally endangered, he will flee, though more often than not this is justifiable. Later in the game he reveals a desire to obtain the Monado for himself, though it is unknown for what purpose as his initial motives would be impossible to realise after having become a Faced Mechon. He possesses a great, burning hatred towards both Shulk and Dunban; the former due to being a threat in wielding the Monado, and the latter out of jealousy.

Metal Face has a much more elegant appearance compared to most Mechon. It has blades for fingers and the framework of its body appears almost skeletal. It also has a cannon mounted on its head. Finally, it has an "abdomen" that is actually the engine used to give Metal Face flight. After getting repaired from its second encounter with Shulk, the "horns" on its head are switched for blood red ones and it is given a bulkier outer shell which conceals most of the abdomen and gives it greater resilience.

Among its fighting abilities, Metal Face is capable of turning into a fighter jet and flying at extreme speeds, and is very agile in this form. It is shown his claw-like hands can slice through almost anything; he uses this ability to disable and destroy one of the Anti-Air Batteries defending Colony 9. It can also charge electrical energy and release from its cannon as either orbs or a large, concentrated beam.

Due to its large size and metallic anatomy, Metal Face also possess great physical strength, having been shown to be strong enough effortlessly pick up and toss a military vehicle that nearly matched its own size. Its metallic body was also extremely durable, especially in its upgraded form, being capable of taking numerous hits from the Monado II (which could now cut through Faced Mechon) before succumbing to all the damage.

The Raid on Colony 9

Leading the raid against Colony 9, Metal Face kills Fiora— causing Shulk to mark Metal Face as his enemy. Shulk's primary motivation throughout the first half of the game is to kill Metal Face once and for all. During the battle it is revealed that Metal Face is immune to the Monado's effects, making him an incredibly dangerous adversary. During this sequence he mocks Shulk with a wag of his finger. Metal Face also wounds Colonel Vangarre in the assault by throwing a large military vehicle on top of him. He eventually flees the raid as the Mechon force begins to withdraw.

Metal Face is later said by Xord to have "scarpered". As Xord continues his efforts against the Monado's wielder, Shulk, Metal Face is repaired from his earlier battle and now has a voice and working mouth.

After Xord's explosion and the brief lift ride to the surface, Metal Face reappears, sadistically taunts Shulk about killing Fiora and how much he enjoyed her screams of pain before attacking the party with an army of Xord Replicas and Mechon Models M64X and M53X. As things look grim for the party, Dunban and Dickson appear to help fight off Metal Face's army. During this battle Metal Face taunts the fighters further, telling them the Monado does not work for a "bunch of losers". Just as he is about to strike the finishing blow, a strange bird appears and attacks him with an electrical Ether bolt, allowing the Monado to cut into his limbs. Taking this as a sign to flee, Metal Face takes off, leaving a frustrated Shulk and Reyn.

During a premonition, Shulk envisions facing Metal Face atop a huge tower (later revealed to be Prison Island), and winning the fight. This is what drives them to continue up Bionis.

Metal Face appears with a new weapon resembling a spear, which can suck the Ether out of a lifeform of Bionis. When the party arrives at the top of Prison Island, Zanza allows Shulk to upgrade the Monado. As Zanza is unleashing the metaphysical shackles of the Monado, Metal Face throws the spear which pierces Zanza through the chest, killing him. In the resulting battle Metal Face also impales Sorean for launching a powerful ether attack. Just before Zanza dies, he tells Shulk that the process is complete and Shulk transforms the Monado into the Monado II. Using it, he fights Metal Face. After the battle, Shulk manages to cut off Metal Face's left arm; however as he goes to kill Metal Face, Silver Face (Face Nemesis) takes the blow for Metal Face, resulting in her chestplate being damaged enough to reveal the Homs body inside her. Face Nemesis retreats and Metal Face follows with the Mass-Produced Faces.

At one point during the showdown, Metal Face hints at Dunban his identity through an attack with his claws, which Mumkhar also used. The shock on Dunban's face confirms he recognises this, but does not believe it could be his old friend.

When the party reaches Valak Mountain's Great Glacier, Face Nemesis reappears. As she speaks to the group, a laser shot hits the side of the Mechon and sends her crashing into a wall, knocking her pilot unconscious. Metal Face is revealed to have fired the shot and the Mechon lands on top of Silver Face, telling Shulk to give him the Monado or he will kill her. When Shulk does offer the Monado, Mumkhar - an old peer of Dunban's who ran off during the Battle of Sword Valley and was supposedly killed by Mechon - emerges from Metal Face to collect it. He taunts the party for a time but is caught off guard by an ether attack from Melia which allows Shulk to regain the Monado and fight. After this battle, Dunban and Mumkhar engage in an intense verbal and physical struggle which culminates in Dunban managing to injure Mumkhar. Before they are able to finish him off, however, a golden Mechon appears to stop the fight and takes Nemesis away. Mumkhar gets back into Metal Face and follows the retreat.

As the group heads toward Galahad Fortress through Sword Valley, Mumkhar appears and challenges them with eight Mass-Produced Faces (although only two Mass-Produced Faces and Metal Face are present for the actual battle). After the fight, Dunban attempts to stab Mumkhar but is prevented from doing so by Shulk. Shulk points out that there are Homs within Faced Mechon, and questions whether Dunban would kill Fiora. This reasoning causes Dunban to relent, but he cuts off both of Metal Face's arms when Mumkhar attacks him from behind. He says that he disagrees with Shulk but is convinced by his words, telling Mumkhar that he does not have time to "play". Metal Face gets up and tells them to die already. Shulk has a vision of a huge spear-like piece of infrastructure falling and impaling Metal Face, thus killing Mumkhar. Shulk tells Mumkhar to stop but Mumkhar, consumed with frustration and hatred, is beyond listening and fires his energy cannon at Dunban in one last effort to kill him. Shulk pushes Dunban out of the way and the shot hits a pillar on Galahad Fortress, shaking loose a spire from the structure, which falls and impales Metal Face as it had in Shulk's vision. The force of the impact causes the platform they were fighting on to break off, with Mumkhar effectively nailed to it by the fallen spire, still alive and screaming as he falls into the abyss of the Great Sea. After Dunban takes a moment to lament Mumkhar's foolishness, the group moves on into Galahad Fortress.

On the Fallen Arm, there is a landmark called "Black Wreckage" between digits four and five. It is the remains of Metal Face. The piece of ceiling that impaled Metal Face can also be seen. There is a Heart-to-Heart nearby - "Eternal Scars" - between Dunban and Melia, in which Dunban says that although he hates Mumkhar, he was an old friend and Dunban cannot forget him.

Metal Face is battled at Colony 9 and Prison Island, he also fought as Mumkhar at Sword Valley.

Metal Face is fought twice, at level 10, west entrance of the Residential District.

Metal Face is fought at level 42 at the Prison Terrace.

Metal Face appears in Super Smash Bros. for Wii U and Super Smash Bros. Ultimate as a stage boss. He appears at night on the Gaur Plain stage and attacks all players, destroying some of the stage in the process. His attacks include firing a large laser to destroy the stage and attacking with his claws. As with all stage bosses, he can be defeated, and doing so produces a large explosion that will harm fighters other than the one who defeated him. He can show up multiple times in the same battle. In Super Smash Bros. for Wii U, he also appears in the Smash Tour mode of the game, where encountering him will trigger a boss battle, and the player who defeats him first gets several stat boosts.

If Shulk is one of the fighters on Gaur Plain while Metal Face is present, Metal Face will notice his young nemesis and occasionally say unique lines to him. It should be noted that Metal Face is slightly larger than he is in Xenoblade Chronicles and lacks his immunity to the Monado and biological lifeforms for gameplay reasons.

Metal Face appears as an enemy character in Project X Zone 2, a strategy RPG developed by Monolith Soft. He is the second character from the Xenoblade Chronicles series in this game along with Fiora, who is a playable character and one half of a pair unit, partnered with KOS-MOS from Monolith's Xenosaga series. 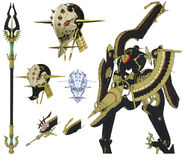 Metal Face, having been blasted by Fiora 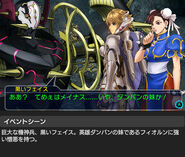 Metal Face Multi Attack in Project X Zone 2
Add a photo to this gallery
Retrieved from "https://xenoblade.fandom.com/wiki/Metal_Face?oldid=494595"
Community content is available under CC-BY-SA unless otherwise noted.