"I wonder... If the people I loved were still around, would things be... different?"
— Mikhail

Mikhail (Japanese: サタヒコ, Satahiko) is an antagonist in Xenoblade Chronicles 2 and a non-playable party member in Torna ~ The Golden Country. He is a member of the secretive organization Torna. He is a Driver and is accompanied by his Special Blade, Cressidus. He is often seen with Patroka and seems attracted to her.

Mikhail was designed by Tetsuya Nomura, a lead character designer for the Final Fantasy series.

As a child, Mikhail was notably shy and reserved, only slightly opening up to Milton and Lora. He often portrayed a cool and tough personality, though he was easily frightened by Mythra's gaze and Jin's personality. He shows little emotion towards the others, though Milton claims he was always smiling on the inside. As an adult, he reveals that he did love everyone he met in Torna.

As an adult, Mikhail comes across as rather playful, acting pompously and dramatically when encountering the party for the first time. He considers himself a thespian and a great romantic. Despite this playfulness, Mikhail tends to maintain more emotional control and focus than Patroka in times of stress, as he is able to recognize when the two needed to retreat instead of resorting to anger. Mikhail supposedly has a deep hatred of the world, especially humans, but this hatred is undermined by the regret he feels for losing the family he found in Lora and her party when he was a child.

As a child, Mikhail was rather small, with wavy blond hair and large blue eyes. He wore a red traditionally Tornan shirt with paler patterns on it. As an adult Mikhail retains his blond hair and blue eyes, and now wears red armor in a similar style to Malos' although with rounded shoulders. His appearance does not change between his Driver and Blade forms other than his Core Crystal being revealed; it is purely blue and shaped like his infinity fan weapons, with three points.

As a child, Mikhail was sold to Porton Village from the unseen Titan Estham and never knew his family. He was the only survivor of the destruction of the village in the Kingdom of Torna after it had been looted and burned down by other humans. Lora and Jin later find Mikhail and offer to take care of him. Once Lora and Addam join forces, Mikhail becomes good friends with Milton as well as many of the Drivers and Blades there, including Haze and Mythra.

Before the heroes travel to the core of the Tornan Titan, Mythra convinces Milton and Mikhail to stay behind in Auresco for their own safety. However, Malos later attacks Auresco during their battle. Mikhail is later seen carrying Milton's dead body on board an Ardainian warship. Mikhail prevents Mythra from touching Milton's body, and Mythra transforms into Pyra out of anguish. Following the war, Mikhail continued traveling with Lora, Jin, and Haze. They travel to Spessia in hopes of meeting the remaining members of Addam's militia.

Amalthus, now appointed to Praetor, ambushes Spessia in an effort to destroy the Aegis. Mikhail is separated from Jin, Lora, and Haze in the conflict and eventually flees to the Indoline Praetorium alongside many other Tornan refugees. These refugees were fused with Core Crystals to become Blade Eaters. To keep this practice a secret, almost all of them were eliminated by Amalthus. Mikhail, however, was the lone survivor and was presumably rescued by Jin.

Five centuries after the end of the war, Mikhail joined together with Jin, Patroka, Malos, and Akhos as the new Torna; they stole Core Crystals from shipments headed to Indol and reawakened the Aegis with the help of Rex.

Mikhail and Patroka first encounter the party in the Empire of Mor Ardain, where they fight them in the Abandoned Factory as Bana escapes. Mythra uses Siren's power to revert Mikhail's Blade, Cressidus, to its Core Crystal. When Patroka is weakened by Fan la Norne, the new identity of Haze, the two are forced to retreat on the Monoceros. He appears against the party once more at Genbu Crown to take the Omega Fetter; here, he is assumed to be a Flesh Eater like Akhos and Patroka, even though his core crystal shows no difference in color from that of a regular blade. He later guides the Monoceros down to the Land of Morytha; upon seeing Morytha for the first time, he starts doubting Torna's end goal, to which Malos tells him to worry about it later, implying that they should focus on rescuing Jin.

Mikhail spends much of his time working on the systems of the Marsanes, the sole remaining Tornan warship which acts as the organization's base, preparing them for the inevitable confrontation with Amalthus. At the World Tree, after Jin and Malos are dropped off, Indol appears and begins fighting the Marsanes. After a fierce battle, Mikhail orders Patroka and Akhos to follow after Jin and Malos, and transforms the ship into an enormous Titan-sized mech, which he uses to fight against Indol directly. Before Patroka departs, Mikhail confesses his love for her, much to her anger. When Mor Ardain joins the fight against the Marsanes, Amalthus assumes Mikhail is a Flesh Eater and tries to control him using Fan's ability; much to the former's surprise, Mikhail reveals that he is actually a Blade Eater: one of the few who escaped Amalthus's purge of them after the Aegis' War.

After Rex and Mythra destroy the amplification towers with the help of Siren, Amalthus releases a massive energy blast at them in rage, which Mikhail blocks with the Marsanes. After a brief conversation with Rex, in which Mikhail reminisces about his past and tells the party how much they remind him of his old friends in Torna, he charges at Indol and slams the Titan into the World Tree. In a massive explosion, he sinks the Titan by sacrificing himself heroically.

Mikhail is fought twice as a boss during the story. He is first battled as a level 34 Driver enemy at the Bulge Harbor in the Old Factory of the Empire of Mor Ardain with his Blade, Cressidus, alongside Patroka. He is later fought at level 43 at the Genbu Crown in the Head area of the Kingdom of Tantal alongside Patroka and Akhos. This enemy drops no items.

※1 Mikhail will use this variant of Leonine Shield during the Challenge Battle Torna's Finest.

During Chapter 6, Mikhail reveals his true form as a Blade. He wields Infinity Fans and gains an entirely new set of arts:

Mikhail fights alongside his Blade Cressidus, who does not have a modifier.

Cressidus is able to use Arts Plus.

As with all Challenge Battle enemies, Mikhail drops no items.

After finishing the game and installing Patch (Ver.1.3.0), New Game Plus will be available and will allow to recruit Mikhail as a Rare Blade. He can grant tremendous power to his Drivers, Rex, Nia, Zeke or Mòrag, and their allies. Mikhail uses the dark element, wields Infinity Fans, and acts as a Tank in battle.

He is not awakened from a Core Crystal but must be found and talked to in order to recruit him. He will bond with the current party leader. He can be found at the Megaflote Base in the Land of Morytha after Indol sinks. If released, he will return to Megaflote Base and can be bonded again (to the party leader). This allows for changing his Driver without the use of an Overdrive Protocol.

Mikhail's Heart-to-hearts, "A Thespian's Life" and "Muscle Power", take place in Alba Cavanich between Mikhail, his Driver, and Patroka and in the Torigoth Relay Base between Mikhail, Cressidus, and his Driver respectively. In "A Thespian's Life", Mikhail attempts to flirt with an Ardainian woman only to be rejected and thoroughly scolded by Patroka, who thinks Mikhail's constant hounding of women is creepy. Mikhail insists that he is charming. In "Muscle Power", Mikhail muses about how interesting Titan battleship technology is, and Cressidus also expresses enthusiasm; the two agree that they make a good team for tinkering with Cressidus dealing with large objects and Mikhail with small. If Cressidus' strength is brought up he will fling his Driver up to Clear Sky Beak.

As with the other Torna Blades, Mikhail does not have a Blade Quest.

Mikhail is an NPC in Torna ~ The Golden Country. He can be found at Spefan Inn in Auresco of the Kingdom of Torna when not traveling with the party.

Mikhail gives no quests, but his Community is gained upon completion of A Small Promise alongside Milton's.

"You Everyone better come back soon. Sitting around and waiting is so boring. I hate it."

Mikhail is the Russian transcription of the name Михаил (Mikhaíl) and resembles the modern Greek pronunciation of the name Μιχαήλ (Michaíl), both of them meaning Michael. 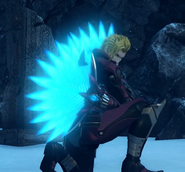 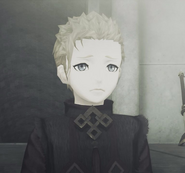 Mikhail as a child at the Indoline Praetorium

Mikhail is found by Lora and Jin

Nia talking to Mikhail in order to recruit him

Mikhail as a child in Torna ~ The Golden Country