Xenoblade Wiki
Register
Don't have an account?
Sign In
Advertisement
in: Pages with spoilers, XC3 stubs, Mio,
and 2 more
English

"Finding a path that lets us all live, I will make that my mission."
— Mio

Mio (Japanese: ミオ) is a playable character and, along with Noah, one of the two central protagonists of Xenoblade Chronicles 3.[1]

She is a soldier of Agnus and from Colony Gamma along with Sena and Taion. She is an off-seer who was initially working for Colony Gamma's arms expansion force.[2]. Mio is an Agnian Human with Blade and Gormotti traits.

Mio has a serious and gentle personality. She writes in a diary as a hobby. She is on her tenth Term and has about three more months left to live; consequently, the question of her legacy weighs deeply on her.

In battle, her speed allows her to easily evade attacks while dishing out damage with her Dual Moonblades, which are weapons similar to Nia's Twin Rings with yellow energy blades along their edges. She can Interlink with Noah into a giant form called Ouroboros. Her initial class is Zephyr, a Defender class. Later in the game, Mio gains access to a unique Talent Art known as Dominion Flower.

Following Pyra, Mythra, KOS-MOS or Melia figures, Good Smile Company has announced a Mio figure made into a 1/7 scale and based on her design in her Zephyr class on August 6, 2022, during the Smile Fest 2022.[3]

Mio as a Zephyr 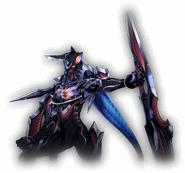 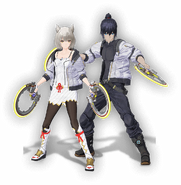 Artwork of Mio and Noah both under the Zephyr class 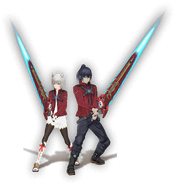 Artwork of Mio and Noah both under the Swordfighter class

Artwork of Mio and Noah combining into their Ouroboros

Artwork of Mio as a Swordfighter 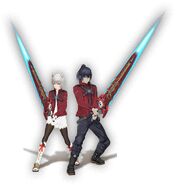 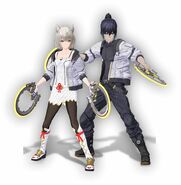 Swordfighter to Zephyr Class Change for Noah and Mio 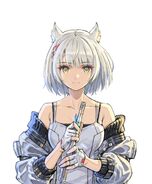 Mio and Noah playing their flutes

Mio and Noah fighting as a team

Mio fighting as a Stalker

One of Mio's Expansion Pass Outfits

Mio looking at a mirror