Mira (English dub: /ˈmɪər.ə/) is a planet and the main setting of Xenoblade Chronicles X. It is about 400 square kilometers and consists of five distinct continents surrounded by an ocean. They are regions divided into Areas, Landmarks, Unexplored Territories, Scenic Viewpoints, and FN Sites. The name of the planet comes from Mira Torres, the former president of Project Exodus, or the Earthlife Colonization Project, who refused to leave Earth before its destruction.

At the beginning of the game the White Whale, carrying New Los Angeles, crashes onto the surface of Mira after being attacked by the Ganglion. In parallel to Mira's continents, New Los Angeles is a main location divided into regions as well themselves divided into landmarks.

New Los Angeles is located in central Primordia which is joined by land to Noctilum and Oblivia. Cauldros and Sylvalum are north of Primordia across a stretch of water. The seas can be traversed on foot or by Skell, connecting all the continents.

Regions consists of the five continents and the districts of New Los Angeles. They are known as Zones in the Japanese version. The visited Region name is displayed on the first location field on the top of the screen. Each Region has its own map, divided into hexagonal segments; this is the Segment Map that is displayed on the Wii U Gamepad.

These Regions do not appear in the segment map and mostly do not have subdivisions.

The appearance expressions of lands of Mira change second by second, by the passage of time, at dawn, morning, noon, afternoon, evening, night and midnight. One real life second equals one in-game minute. The life of the New Los Angeles residents also evolve with passing time. The night can be a special moment to easily encounter dangerous creatures.

The weather also varies on Mira with, for example, a sunny or a cloudy sky, with rain, thunderstorms, polar auroras or rainbows. Each continent has unique weather conditions, from sandstorms in Oblivia to energy mist in Sylvalum.

The party can change the time (hours and minutes) on the Rest Spots of the BLADE camps scattered all over the Mira planet.

There are various intelligent life-forms other than humans present on Mira. The Nopon are native to Mira and travel in merchant caravans. The Ma-non are pacifist aliens with highly advanced technologies. The Prone are belligerent alien antagonists who are hostile to humanity. L'cirufe is also stated to be native to Mira, but there is not much more information regarding this race besides L explaining that they perpetually seek new knowledge. 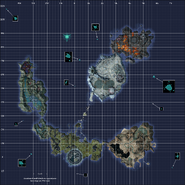 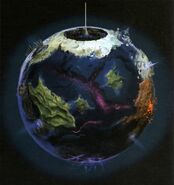 The White Whale crashing into Mira

A beach with New Los Angeles in the background

A field with large plants in Sylvalum

A pond under twisting branches

A Skell flying during night-time

Swimming through water in the desert

Jumping across the top of a waterfall

Driving through Oblivia at night

Jumping into a lake in Oblivia

Walking on a giant branch

Walking towards a colossal plant

Bridges made out of branches
Add a photo to this gallery 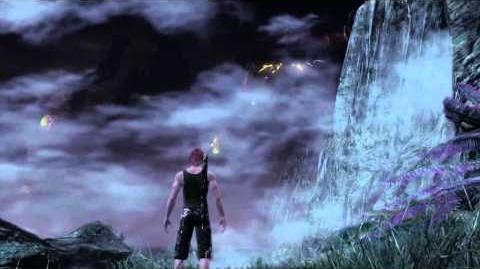 【XenobladeX】時間と天候
Time and weather
Add a photo to this gallery
Retrieved from "https://xenoblade.fandom.com/wiki/Mira?oldid=491323"
Community content is available under CC-BY-SA unless otherwise noted.