The missions of the BLADE members are given in the form of Missions that are displayed in a Mission Control.

Looking at the Mission Control allows access to the names of the missions, the type, and the required BLADE Level displayed as stars. Once the mission is selected, the navigation can be activated in the Mission Control that displays it on your map. Then by using the Navigating Settings for mission on the right of the screen, the destination can be displayed on the map.

Affinity Missions feature cutscenes and fully voiced dialogue. Most unlock party members, allow Cross to learn other characters' signature arts, or are required to begin specific Story Missions. Once begun, they cannot be abandoned, and no new Story or Affinity Missions may be started until the current one is complete.

Normal Missions are requests to solve the personal problems of the residents of New Los Angeles. These missions typically have several objectives, and can be received by talking to NPCs who have a "?" icon over their head.

Basic Missions refer to missions accepted from the Mission Control, and are listed there on a semi-random basis. Even if all prerequisites for a Basic Mission are completed, the mission might not immediately appear on Mission Control. They are known as SimpleQuests in the Japanese version.

Squad Missions refer to missions related the Network's Squad involving online multiplayer. These missions may be completed with other players online, or by oneself with NPC companions. These missions place the party in a closed off area and give instructions to fight several waves of enemies. Squad Missions are started at the Network Console inside the BLADE Barracks. They each have a minimum required level to participate, and a sync level that any characters (including the player) will be lowered to (temporarily) should it be exceeded. Current Squad tasks must be cleared in order to take on Squad Missions.

Nemesis battles are a special type of Squad Mission to fight Telethia Plume or Yggralith Zero, extremely powerful enemies with even higher stats than Tyrants.

In the Japanese versions of Xenoblade Chronicles X, there was content not included with the initial release. The additional content was later released in downloadable content packs, but was integrated into the international release at no additional cost. There are two types of DLC Missions.

DLC Support Missions come with the three DLC Support packs. These missions reward players based on the DLC pack they came from. One DLC pack awards EXP, BP, and Class Rank Points; another awards credits and Miranium; the third awards affinity between party members. 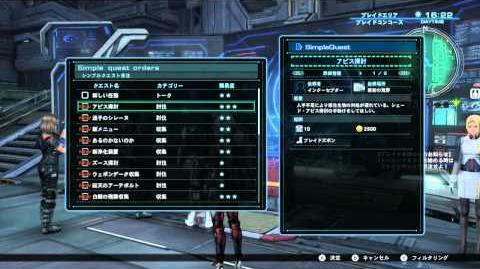