"You're not invincible. Monado Enchant!"
— Shulk

Monado Enchant is one of Shulk's Monado arts in Xenoblade Chronicles. It grants an Enchant aura to all battle party members, enabling them to damage Mechon with normal weapons, and increasing the damage inflicted on Mechon by Auto-Attacks.

Dunban is able to use this art while he has the Monado, during the Battle of Sword Valley prologue and the Mechon raid on Colony 9.

In Future Connected, Monado Enchant is not available to Shulk, due to the complete lack of Mechon.

Monado Enchant is a passive ability on Shulk's affinity chart in Xenoblade Chronicles 2, which increases damage dealt by the party by 20% to 40% when at max affinity, the percentage depends on his affinity chart. 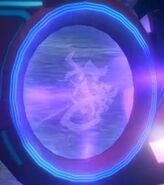