For her other forms, see Pyra and Pneuma.

"I am not Pyra. I am Mythra. Pyra... She's a different self that I constructed."
– Mythra

Mythra (Japanese: ヒカリ, Hikari; English dub: /ˈmɪθrə/) is a main character in Xenoblade Chronicles 2. She is the Aegis, a Legendary Blade who can grant tremendous power to her Driver Rex, and his allies. Since Pyra is another personality Mythra created, they can freely switch places. Rex is able to freely use this ability both in and out of battle upon starting Chapter 5. Mythra's powers have a focus on light-element attacks. Some of her other powers include near light-speed movement and Foresight, which allows her to seek into the immediate future. However, after Pyra shares her life force with Rex, Mythra becomes subject to the same limitations in regards to her healing capabilities and immortality.

Mythra is also a central character in Torna ~ The Golden Country. She is a Special Legendary Blade who can grant tremendous power to her Driver Addam and his allies.

Mythra is confident in herself, reckless, and independent. She has a short temper, a rude disposition, and is not afraid to openly express her thoughts. While during the events of The Golden Country Mythra is shown to have little sympathy for others, in Xenoblade Chronicles 2 she is much more calm and analytical.

Due to the destruction she once caused, Mythra considers herself to be a danger to others, and wants to reach Elysium alongside Pyra to beg the Architect for their death.

Unlike Pyra, Mythra is not good at cooking, despite enjoying doing so. It angers her when people dislike the food she prepares. She is also a terrible sleeper, often sleepwalking and snoring among other things.

Mythra is a young woman with long blonde hair, fair skin and golden eyes. She has an identical figure to Pyra; taller than Rex but still relatively short. After resonating with Rex, Mythra's cross-shaped Core Crystal loses its center, leaving a X-shaped gap behind. Mythra wears a short white dress with numerous golden and green ornaments, and a golden tiara. She has two green symmetrical crosses on her chest armor, differing from Pyra's single cross. Mythra's weapon is a large, jagged white sword which emits yellow-green ether energy when activated.

Mythra has four alternate costumes, three of which can be obtained via Challenge Battle Mode and one (Massive Melee Mythra) through normal gameplay after Update 2.0.2. These are:

After Amalthus awakens Malos, he is warned that he will not be able to handle the power of a second Aegis and thus begins to search for a suitable Driver for the second Aegis Core Crystal. He finds Addam, a prince of the Kingdom of Torna, who awakens Mythra and begins trying to stop Malos' wanton destruction across Alrest. The two travel alone for a year trying to predict where Malos may strike next, following the trail of his attacks. By chance they save Lora and Jin from a Gargoyle, and agree not to take Jin from Lora in return for help dealing with Malos. They also rendezvous with Hugo - the young emperor of Mor Ardain - and Minoth, a Flesh Eater belonging to Amalthus. This party fights Malos whenever they can, but fail to stop him from breaking the seal on the Tornan Titan.

Later, Mythra uses Siren directly to attack Malos, and the two Artifices clash in the sky overhead as the party fights Malos on the ground. In spite of Malos being outnumbered he recognizes that Mythra is not using her full power and thus decides to goad it out of her by entering his Siren and directing it to fire upon Auresco, where Addam's companion Milton, a young Gormotti and Mythra's friend, has been told to wait due to the dangers of being present for the confrontation against Malos. Mythra activates her full power, preventing Addam from driving her, and enters her own Siren to attack Malos one-on-one.

Malos wipes out Auresco and revels in Mythra's power, encouraging her to burn everything. She shoots him down, destroying his Siren and badly damaging his core crystal, but her attacks kill the Tornan Titan and it sinks beneath the Cloud Sea, leaving a single refugee ship standing. Upon the ship Mythra sees Milton's body, being shielded from her by Mikhail, and the grief causes her to spontaneously become Pyra in the hope of never using her destructive capabilities again. Addam agrees to seal her beneath the Cloud Sea to prevent others from using that power, and for 500 years Mythra sleeps.

After being awoken by Rex, Pyra reveals that her true powers do not come from fire, but does not tell her companions about Mythra. Malos repeatedly asks why she chooses that weaker form over her original, but Mythra does not awaken until she has to to save Rex. In the Olethro Ruins, where Pyra has gone to save Iona from Malos and Akhos, Mythra awakens after Vandham's death and uses Siren to destroy Obrona and Sever, forcing Malos and Akhos to retreat. She is furious at having been awoken, and retreats back into Pyra for a short while.

In Mor Ardain, Mythra and Pyra agree that Rex should learn how to use Mythra's powers, and so Mythra becomes Rex's main Blade. Her powers greatly eclipse Pyra's, using light instead of fire and wrecking quite indiscriminate destruction that prevent her from fighting effectively indoors. This peaks in the Old Factory, where Torna members Patroka and Mikhail attack the party, intending to kidnap Pyra. Pyra switches to Mythra at the last minute and destroys Patroka and Mikhail's Blades, Perdido and Cressidus, leaving the pair to flee. If Mythra recognizes Mikhail from his childhood on Torna, she makes no note of it.

In Indol, Mythra talks with Amalthus about Torna and their shared history. Mythra also remarks that it is strange that Haze has changed her name and, after her death, that her core crystal has been halved. When she faces Jin in Temperantia, Mythra questions why he has sided with Malos now, but quickly realizes that it was due to Lora's death. Jin escapes and the party head to the Kingdom of Tantal, where Mythra is able to fix the Omega Fetter as it was initially a component of Ophion, one of her Artifices. After this however the party is ambushed by Torna, and Mythra's foresight is useless against Jin's ability to travel at the speed of light. Pyra takes control of Siren for long enough to threaten her own death, and is taken by Torna along with the Omega Fetter in exchange for the rest of the party being unharmed.

Malos takes Pyra's memories, including knowledge of Artifice Aion, to restore his health. In theory this leaves Pyra a husk, essentially a body with no mind, although in practice it doesn't seem to do her any damage at all. The party come to rescue Pyra and fight Jin and Malos in spite of knowing that Pyra has been emptied and that Jin is able to defeat them alone. Rex fights without an Aegis sword and as he does so he sees both Pyra and Mythra, who tell him that he should leave them to die, as that is why they wanted to get to Elysium anyway. Rex insists that he is fighting for them, and his resolution and understanding of both of them allows him to access the power that Addam could not - and Pneuma awakens, unharmed, to fight at Rex's side.

During the battle, Malos summons Ophion, to which Pneuma summons Siren. The two Artifices battle, and that battle destroys the ground below, causing the party to fall to the Land of Morytha, splitting them into small groups. Mythra wakes up with Rex, and they set out to find the others - but first find Jin, whose core has been damaged and is struggling to fight a Guldo. Mythra attempts to use her Aegis powers to restore him, but discovers that he is a flesh eater and thus cannot heal him completely. They continue to travel through Morytha, and find Brighid and Poppi.

One night in Morytha Poppi confides in Mythra that she fears, because she is a machine, that she may cause destruction as whatever machines destroyed Morytha did. Mythra promises her that she will destroy her if she becomes destructive, and Poppi promises to do something of equal measure for Mythra, too. They reunite with the rest of the group and make their way up the World Tree, finding Elysium at the top. It is a barren, dusty wasteland with the ruins of a city, contrary to Mythra's memories. The church bell that has always tolled in Mythra's memories stops as they approach the church, and descending into it causes the party to be split into their own minds, going over confrontational interactions with each other that explore timelines that could have been. Rex winds up in a house with Pyra and Mythra, who are acting opposite to their usual characters, and when Rex begins to cry Pyra asks that the Architect stop.

The party fight and kill Malos, and Pneuma uses Aion to save Alrest from the debris of the World Tree as it collapses, letting her companions escape and accepting her death from the resulting explosion. Poppi abides by her promise to Mythra and does not help Rex intervene.

After Pneuma's sacrifice and the rebirth of the world, Pneuma's core crystal begins to glow in Rex's hand. He resonates with it again and in a brilliant pillar of light both Pyra and Mythra reawaken in separate bodies, although it is left ambiguous as to whether they remember Rex or have been reborn without memories as Blades usually are.

Mythra takes place in far fewer Heart-to-hearts than Pyra, in part due to being unavailable for the first portion of the game. These are:

Mythra is fought alongside her Driver, Addam, in Feltley Village at level 10 before she joins the party. Unlike most Blade enemies, Mythra fights as a separate enemy rather than a buff for Addam.

As with all story-exclusive enemies in TTGC, Mythra drops no items, only gold.

Role in World of Light

Despite their status as downloadable content, Pyra and Mythra do have a legitimate role in World of Light, as the latter appears in the base game as a spirit that can be found in the Final Battle Realm, meaning that she was vaporized by Galeem. Defeating this spirit does not unlock her and Pyra as a playable character; rather, they are unlocked after downloading them and defeating at least 10 other fighters from Galeem's control, just like other DLC characters.

Mythra also appears as a spirit in Super Smash Bros. Ultimate. Her artwork was also altered from its original appearance, adding clothing to cover up her cleavage as well as black leggings, most likely to keep the game's ESRB rating to E10+. Prior to this game's release, this edited design was added into the version 2.0.2 update as Massive Melee Mythra.

In addition to the Pyra figure previously announcement by Nintendo, Monolith Soft has announced the Mythra and Siren figures made into a 1/7 scale respectively by Good Smile Company and Kotobukiya. The Mythra figure is approximately 210mm in height, and is based on a concept art designed by Masatsugu Saito.

Her Japanese name Hikari, 光 in kanji, means "light". The English name, Mythra, alludes to Mitra, a reconstructed name of a Proto-Indo-Iranian Divinity, from whom derived Mitrá, Rigvedic name of a Indo-Aryan Divinity representing in time the Oath, Friendship, or (eye of, light of) the morning sun; and Mithra, Avestan name of a Zoroastrian angelic Divinity (yazata) of Covenant, Light and Oath.

Official art of the models 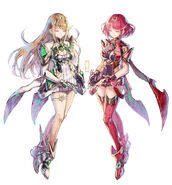 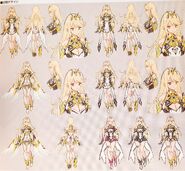 Mythra's sword
Add a photo to this gallery

Mythra using an art that Pyra will later inherit 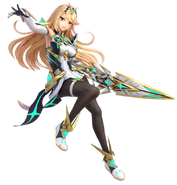 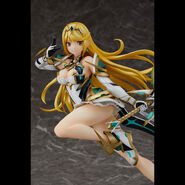 The 1/7 scale Pyra and Mythra figures

The 1/7 scale Pyra and Mythra figures

Retrieved from "https://xenoblade.fandom.com/wiki/Mythra?oldid=481389"
Community content is available under CC-BY-SA unless otherwise noted.