Nene (Japanese: ネネ) is a playable character in Future Connected, the epilogue extension of Xenoblade Chronicles: Definitive Edition. She is a Nopon, daughter of Riki and Oka and adoptive older sister to Kino.

Nene looks after Kino like a mother. She appears to be the most responsible of Riki's children, as she was the one who helped shoulder her mother's workload while Riki was busy with Heropon duties. Despite being young and cute, she is very reliable and is a powerful fighter, although also experiences a fear of tree-climbing due to an accident when she was younger.

Nene is a teen Nopon with pink fur, pink hair with pale canary yellow highlights held into two pigtails by cherry red bows, and brown eyes. She wields a wooden flat bat weapon and wears a silver shield on her chest over a red, white, and light blue dress.

Nene is present as a littlepon when Shulk and party stop at Frontier Village and meet Riki and his family, although she is not identified until she mentions it much later to Shulk in "All Grown Up" on the Bionis' Shoulder.

One year later, Nene spots her adoptive younger brother Kino in Colony 9 eavesdropping on Shulk and Melia's plan to retake Alcamoth. When Kino goes to stowaway on the Junks, Nene follows out of concern for his safety. A crash landing forces them to fight off monsters and blow their cover to Shulk and Melia. The two are allowed to journey with them. As they go on their adventure, Nene bonds with the rest of the party and helps them defeat the Fog King.

Nene has the same Arts as Reyn thus acts mainly as a tank, being able to easily attract the aggro of enemies and the ability to wield heavy armour and defense increasing weapons. 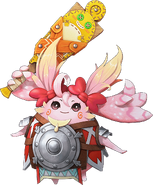 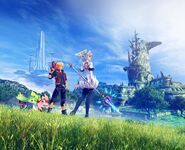