"Need treasure appraised? Leave it to a Nopon!"
— Nopon

The Nopon (Japanese: ノポン; English dub: /ˈnɒpɒn/ or /ˈnoʊˌpɒn/) are a recurring race of small fuzzy creatures found in every game in the Xenoblade Chronicles series.

While Nopon vary slightly from one individual to the next, they are all small, round, egg-shaped creatures covered with fur and feathers. They sport small faces and have a pair of stubby arms and stubby legs, as well as a pair of prehensile wing-like ears, which are stated to allow them to slightly glide. They also tend to keep these wings wrapped around their necks when not in use. They often have very tiny fangs.

One noticeable aspect of Nopon is their unusual speech patterns: they use very short sentences and speak in the third person, referring to strangers in the second person as "friends," sprinkling familial terms with "-pon" honorific suffixes, and sometimes repeating phrases. This is especially prevalent in Xenoblade Chronicles, where they refer to Homs as "Hom Hom," High Entia as "Bird People," and Telethia as "Dinobeasts".

The origins of their speech pattern has varied from game to game. In Xenoblade Chronicles, one of the Nopon in Frontier Village humorously mentions that the Nopon race adapted their speech after a lot of research in Homs language. According to the same Nopon many Nopon who live with Homs for extended periods of time learn to talk normally. Nopo'rikh confirms the same happens to Nopon who live for extended periods of time in High Entia society. Some Nopon like Kaleka are multigenerational descendants of immigrants to predominantly non-Nopon societies, and speak in complete and fully-articulated sentences with no characteristic Nopon speech tics whatsoever.

In the world of Xenoblade Chronicles 2, it is revealed during Uncover the Truth that an ancient Nopon started the tradition of using "silly sounding, grammatically imprecise sentences" in order to make themselves seem even cuter, before which the Nopon spoke in a formal, grammatically correct manner.

The Nopon originate from a warm, jungle-like region on Bionis known as Makna Forest. They have since spread out across the world and travel as salesmen, and the player can find Nopon living or encamped in most regions of Bionis. A Nopon in Frontier Village states that Nopon have passageways that only they can enter due to their tiny size, which allows them to quickly travel from one point on Bionis to another. Their main village, Frontier Village, is still within the largest tree in Makna Forest.

The Nopon lifestyle seems mostly laid back and easy-going. According to one Nopon in Frontier Village they try to live alongside nature — although this same Nopon suggests dire consequences should this ever change. This laid-back lifestyle and a wish to avoid strife means the village tries to avoid contact with Mechon. So far there are no records of Mechon attacking Frontier Village, suggesting at least that this has worked. The Nopon do, on occasion, find themselves at odds with Telethia that venture into Makna Forest, and refer to the creatures as "Dinobeasts".

Nopon are also skilled at making and selling various wares. Many Nopon, if not living in Frontier Village, choose to become merchants, traveling across much of Bionis and, in the process of buying and selling goods, collect information from all across Bionis. These merchants often use trained Armu to carry their wares, and one Nopon in Frontier Village can be found in the process of taming a Mammut. A Nopon in Colony 6 states that Merchants are important to the information network of the Bionis because they are almost everywhere on Bionis.

Every year, one Nopon is chosen by Frontier Village's Seer, Chief Dunga, to become the Legendary Heropon for a year. This Heropon is apparently tasked with keeping Frontier Village safe. When Shulk and his party arrive, Riki is chosen as the Heropon for this year. Riki then joins the party, being the only Nopon to do so. However, Chief Dunga tells Riki that there was a prophecy in which he goes with the party after Riki helps them slay the Leone Telethia. Riki objects, saying that Chief is lying, but the Chief convinces him to go.

Nopon researchers can be found all over Bionis, in places such as Valak Mountain and Makna Forest. They give a number of quests.

While Nopon do not appear to be any more powerful than the average Homs, they do have some unusual abilities that set them apart, like being able to communicate with animals, allowing them to use them as beasts of burden; both for carrying goods and for military use. It is also hinted that the Nopon have some spiritual powers that Homs do not, as Riki senses the presence of those that have passed away twice in the story.

Nopon grow up at seemingly the same rate as Homs, but they can potentially have a much longer lifespan than Homs. They can grow to be 160 or even 240 years old. The Nopon Sage has apparently been alive for 9,999 years, longer than any other character on the affinity chart.

It is also mentioned that the Nopon race can use Ether attacks that are similar to the the High Entia's powerful Ether control but this takes a lot of effort and is not considered "True Ether" by the Nopon race.

A Nopon Merchant in Satorl Marsh states that, despite originating from Makna Forest, the Nopon are capable of being able to adapt to any environment, including inside the Bionis itself. This is proven by the presence of a Nopon NPC in the Third Lung.

In Xenoblade Chronicles X, Nopon are introduced as natives to the planet Mira. Unlike other games in the series, Xenoblade Chronicles X does not feature a playable Nopon character. However, the Nopon Tatsu is a supporting character who is almost always seen with Lin, and will accompany the party if she is in it. Nopon fur colorations are more detailed than in the first game, a trait which has continued in subsequent games.

Nopon live as travelers on Mira, collected together in caravans which often move from one location to another. Prior to the events of the game they were some of the only known sentient inhabitants of the planet (alongside L), however the arrival of the Ganglion - particularly the Prone - has a negative effect on the Nopon population, as the Prone use Nopon as a food source. The human characters also often joke about the resemblance of Nopon to various vegetables to wind Tatsu up, while Ma-non frequently refer to them as "walking lunch pails."

Nopon often act as merchants, having established merchant camps (known as Nopon caravans) in all five regions of the planet, as well as founding the Arms Manufacturer known as the Nopon Commerce Guild. Several nopon also move to New Los Angeles in hopes of expanding their business.

There are four known divine Nopon spirits - Napopon, Nipopon, Nupopon and Nopopon - who are ancient legendary beings amongst the Nopon folklore. They are all 9,999 years old, and each inhabit a different region of Mira (excluding Primordia). They are similar to the Nopon Sage in Xenoblade Chronicles, although they fight the party themselves in monstrous forms rather than set tasks.

It is unknown if the Nopon of each game have any connection to those in other games. However there have been several mentions of elements of the first game throughout Xenoblade Chronicles X, such as the existence of a Heropon - who is supposed to defeat "evil and wicked gods" - or the mention of a Legendary Frontier Village.

In Xenoblade Chronicles 2, Nopon are similar to those from previous games. The Nopon are widespread across Alrest. They mostly make their home in eleven merchant Guilds found across Alrest, the main one being the Argentum Trade Guild built on Argentum Titans. Of these, five are named in the game: Argentum, the largest and only accessible one; Larus; Momon; Pyrithium, the smallest; and Voltis, the second largest. Tora, one of the main playable characters of the game, is a Nopon.

It is shown that a few Nopon are skilled mechanics, being able to construct artificial Blades. Some Nopon are also shown to work as traveling merchants, willing to venture to even the most dangerous of locations, such as Temperantia, to sell their wares. In the quest World Tree Disaster, it is revealed that Nopon have the ability to resonate with Core Crystals and become Drivers, though Nopon Drivers appear to be few and far between.

A variety of Nopon outside Frontier Village in Xenoblade Chronicles

A Nopon in Frontier Village in Xenoblade Chronicles

Nopon during the second Battle of Sword Valley in Xenoblade Chronicles

Kino and Nene in Future Connected 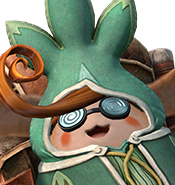 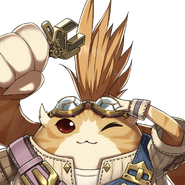 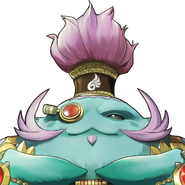 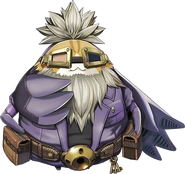 A Nopon as they appear in Xenoblade Chronicles 2