The Orpheans (English dub: /ˈɔːrfiən/) or Orphe (Japanese: オルフェ, Orufe; English dub: /ˈɔːrfi/) are a race of beings in Xenoblade Chronicles X. They are an alien race who were exiled from the Ganglion. They are a highly intelligent and discrete tribe of technology builders, and they were the makers of many of the Skell weapons for the Ganglion. They founded the Orphean Technologies Arms Manufacturer. The party first encounters an Orphean, Kun'luarb, in Noctilum during the mission Rescue at the Ensconced Citadel. After the mission Circle of Life is completed, the Orpheans start to make their home in New Los Angeles.

Orpheans are humanoids that resemble insects — possessing mantis-like heads and segmented bodies. They have incredible regenerative abilities, being able to regrow entire lost limbs in just a day. They reproduce through fission, which is catalyzed by Senirapa Water. This is revealed in particular during the Normal Mission Circle of Life. When the water is poured on an Orphean — usually one that is dying — the original disappears and two "offspring" copies take its place. This is possible due to a symbiotic virus inside them called the Ovah.

After their arrival on Mira the Orpheans produced by division have become increasingly individualistic and varied. This culminated in the creation of an entirely new gender for their species.

The Ovah (English dub: /ˈoʊvɑː/) is a virus that exists within the Orpheans. It guides them in an attempt to secure its survival. It is probable that this is what allowed them to survive and thrive on their home planet. The Orpheans describe the Ovah's effects as a kind of gut feeling inside them. They view it as something sacred, unique to them, however during their stay on Mira, the virus was able to bond with the Visigels of Cauldros, calling their beliefs into question.

In the distant past, before they began to inhabit the Orpheans, the Ovah were once a single entity. It floated in the ocean of another world where Telethia also lived. The Telethia of Mira apparently considers the Ovah impure, and it is hostile to Orpheans.

Orphean cities are described as incredibly verdant. This is no surprise considering their diet.

Kun'luarb encountered by the party 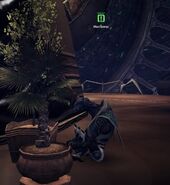 Mon'barac sitting by some plants
Community content is available under CC-BY-SA unless otherwise noted.