Xenoblade Wiki
Register
Don't have an account?
Sign In
Advertisement
in: Pages with spoilers, XC3 stubs, XC3 Mechanics,
and 3 more

Ouroboros (Japanese: ウロボロス, Uroborosu) are forms created from the Fusion of two characters in Xenoblade Chronicles 3.[1]

Ouroboros are larger forms taken by various pairs of characters, who combine through Interlink when certain conditions are met. Each Ouroboros has its own powerful moveset, and deciding when to transform can be the key to winning a battle.

Noah and Mio, Eunie and Taion, and Lanz and Sena are all capable of this transformation. All three pairs can assume two different forms, depending on which character is in control.[2]

Noah, Lanz and Eunie confront Mio, Taion and Sena on a battlefield, the two groups being selected for a special mission for Keves and Agnus. They meet during the course of those missions and clash on the battlefield until they are suddenly attacked by a Mysterious Giant, who is in fact Consul D. While Noah is trying to save Mio who is about to be attacked by the Giant, Guernica Vandham appears and activates an Interlink that make their bodies fuse and transform into an Ouroboros. They manage to survive the attack of the Mysterious Giant, however this leads to the six characters becoming the target of Keves and Agnus, now that they are fugitives and have the ability to transform into Ouroboros, considered by both nations as particularly dangerous beings.

The Lost Numbers and the people of the City are descendants of the first Ouroboros, whose statues can be found there.

Ouroboros can be further upgraded by spending Soul Points in the Soul Tree to unlock new traits and abilities, and they can also participate in chain attacks.

Ouroboros have their own Arts.

Using Fusion Arts in combat raises the Interlink level, which strengthens the Ouroboros. It is important to consider whether to use the Ouroboros right away or wait until the level is higher.[3]

Using Fusion Arts in combat raises the Interlink level, which strengthens the Ouroboros. Interlinking can be performed at any time during a battle and during this process, powerful Ouroboros Arts can be utilized without limit, however the Heat Gauge will slowly increase over time. A powerful Talent Art should be used before Interlinking is released once the Heat Gauge is full.[4]

An Ouroboros is an ancient symbol depicting a serpent, dragon or worm that eats its own tail, as a representation of the continuous cycle of life and death, and by extension anything of a circular or recursive nature. The word comes from the Ancient Greek οὐροβόρος meaning "tail-devouring". The symbol was adopted in Gnosticism and Hermeticism to symbolize the cycle of life, death, and rebirth. 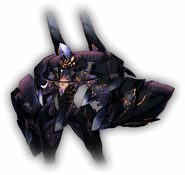 Lanz and Sena's Ouroboros with Lanz in control

Lanz and Sena's Ouroboros with Sena in control

Noah and Mio's Ouroboros with Mio in control

Artwork of Noah and Mio combining into their Ouroboros

Noah and Mio fusing into their Ouroboros

An Ouroboros in battle