Xenoblade Wiki
Register
Don't have an account?
Sign In
Advertisement
in: Pages with spoilers, Pyra, Mythra,
and 4 more

For her other forms, see Pyra and Mythra.

Pyra and Mythra's ascended form, also known as Pneuma (Japanese: プネウマ, Puneuma), is a special Blade in Xenoblade Chronicles 2. She is the combined true form of both deuteragonists Pyra and Mythra, merging both of their personalities into one.

As the embodiment of the true power of the Aegis, Pneuma is capable of rewriting the physical rules of her surroundings, resulting in all type of feats, from light-speed movement to slowing down time itself.

She is obtained during the battle against Malos and Jin at the Cliffs of Morytha in Chapter 7.

Pneuma is calm and resolute, having lost her insecurities as Pyra and hostility as Mythra upon combining them. She does not appear to view herself as a separate entity to Pyra and Mythra as Pyra and Mythra treat each other distinctly, and does not remain present for longer than is necessary, favouring being Mythra or Pyra.

Pneuma's physique is identical to Pyra's and Mythra's, although she has long, green hair tied in a ponytail and green eyes. She wears a silver tiara and a white, blue and green plate armor with emerald green crystal-like ornamentation, matching Rex's master Driver armor. When using ether attacks, an emerald lattice of energy surrounds her.

"Πνευμα" is written on her chest - Pneuma in Greek - with the text of Proverbs 4:18 in Latin beneath it: "The path of the righteous is like the morning sun, shining ever brighter till the full light of day".

Pneuma's sword is silver, with a ring near its handle. When activated, the entire sword glows with green ether energy.

Pneuma, alongside Ontos and Logos, was one of the three cores of the Trinity Processor used by Klaus aboard the First Low Orbit Station to create Alrest. When rebuilding the world, Klaus repurposed two of these cores into the Aegises. The Aegises were tasked with collecting data from the Blades and then redistributing said information to help them adapt and evolve. All information collected by the Aegises are passed onto the Architect.

Amalthus, with a strong hatred for the world, one day climbed the World Tree in hopes of meeting the Architect and seeking answers. When he arrived at Elysium, he found it empty. As proof of his deed, he took the cores of Pneuma and Logos back to Alrest. Upon arriving in Indol, he awoke Logos, who became known as Malos. Inundated by Amalthus's hatred of the world, Malos set out to destroy the world.

Amalthus searched for a Driver capable of awakening Pneuma's Core Crystal and stop Malos. Addam, the Hero of Torna, eventually awakened Mythra. During Addam's final battle with Malos, Mythra awakened a portion of Pneuma's power. Addam could not control her true power, and the ensuing destruction led to fall of the Kingdom of Torna. Upon seeing the destruction, he and Pyra sealed Pneuma's Aegis Sword away deep inside of Spirit Crucible Elpys. He then tasked Azurda with guarding Fonsett Village, home to the entrance of Elpys.

After Jin defeats Rex and takes Pyra at Genbu Crown, King Eulogimenos mentions the Tantalese book containing evidence of the third Aegis Sword. Azurda then leads the party back to Fonsett Village and inside of Spirit Crucible Elpys. At the Vault of Heroes at the end of Elpys, endless Phantasms of Addam challenge the party. Addam's spirit recognizes Rex as the man he has been waiting for and talks to him in a vision in the fields of Elysium. He mentions that to become Pyra and Mythra's true Driver, he must take on all of her burdens. Pneuma's sword is then presented to Rex. After he touches it, he receives a brief vision of Klaus's experiment before the sword disintegrates from his hand.

The party eventually meets Jin and Malos at the Gotrock Oracle Ruins at the Cliffs of Morytha, where Malos hands over an unconscious Pyra. Rex and the party attempt to fight the duo, though Pyra and Mythra beg Rex to give up and reach Elysium without them. Rex claims that he won't break his promise, and after a brief vision of the Aion Hangar, he summons the third Aegis Sword. Pyra then reawakens as Pneuma and gives Rex a similar outfit to hers.

Pneuma's power allows her and Rex to match speeds with Jin and easily take him down. Malos then summons Ophion, and Pneuma summons Siren in response. A battle between the Artifices destroys the cliff and sends the party and Jin beneath the Cloud Sea to the Land of Morytha. Pneuma uses her power to temporarily heal Jin and discovers that he is a Flesh Eater. Afterwards, she opens the path up to the World Tree, though she claims it was instinctual.

As the party meets Klaus, he addresses Pyra as Pneuma, the first time her name is officially stated. He reveals that upon seeing that the humans on Alrest were no different from the past, he lost faith in the world. For this reason, he did not stop Amalthus from taking Pneuma and Logos back to Alrest. However, he reveals a change of heart after seeing the unique bond between Rex and Pneuma and gives Pneuma all of Elysium's authorizations. He explains that the Aegises draw their power from the Conduit and that with his other half's death, the Conduit will disappear, leaving Pneuma powerless. The party then goes to stop Malos.

Rex and Pneuma are able to defeat Artifice Aion and Malos by using Infinity Blade. The attack damages Malos's Core Crystal, and he soon dies. With the Conduit's disappearance, the space elevator begins to break apart, meaning the World Tree would collapse onto Alrest. Pneuma tells the party that a control room that could activate rocket boosters to prevent this. This ends up being a ruse; Pneuma must use the last of Artifice Aion's power to destroy the World Tree. She convinces Poppi to not help Rex come with her and gives her Core Crystal to Rex so that he may live on. She also allows Azurda to return to his Titan form so that the party may survive the journey back to Alrest. As the party escapes, she reactivates Aion and is seemingly killed in the explosion.

To activate Pneuma, Rex must first have both a full party gauge and max affinity with Pyra or Mythra during battle. From there, the player must press and hold the R button followed by the X button. On activation, Rex is unable to switch to another Blade until her gauge is depleted, signified by her Blade icon slowly becoming grayed out.

She grants a number of advantages to Rex and the rest of the party. Her most notable ability is being able to choose any combo route and perform Blade specials for any element. Pneuma does not have an accessible affinity chart - she is locked to E rank Trust and she cannot be equipped with Aux Cores. Her Physical/Ether resistances are the highest in the game, at 60/60.

Despite being commonly used by fans to refer to her, Pneuma is not actually her "official" name but the name of her core crystal, just as Malos' name is not Logos. The Architect initially refers to both Pyra and Mythra as Pneuma before later correcting himself by calling them "Pyra and Mythra". She is referred to as "Pyra's ascended state" in the game and as "Pyra (awakened)" by the Japanese guide. In the game files she has as name "Homuri", a combination of Homura (Pyra) and Hikari (Mythra). Xenoblade 2: Official Artworks refers to Pyra and Mythra's ascended state as "Pneuma (Awakened Pyra/Mythra)", making it the first official material to use Pneuma's name for the ascended form.

During one of the cutscenes of Chapter 8, the player will be prompted to choose between Pyra and Mythra. The chosen name will be used as Pneuma's name for the rest of the game, both in gameplay and cutscenes, and cannot be changed until reaching Chapter 8 again in New Game Plus. The name will also slightly modify the ending of the game, focusing more on either Pyra or Mythra in the post-credits scene. While watching cutscenes in the Event Theater, it is possible to choose one of the names for each individual cutscene.

During that same cutscene, Rex proposes two other names for her: Pythra and Myra, though none of them are ever used.

Pneuma appears as a Legend-class Spirit in Super Smash Bros. Ultimate that can be obtained on the Xenoblade Chronicles 2 DLC Spirit Board. Due to not having an official full body illustration, Masahiro Sakurai requested Monolith Soft and the original character designer to illustrate one for her for this occasion. Additionally, Pyra and Mythra's 2P color option is based on Pneuma.

Her name comes from the ancient Greek word πνεῦμα (pneuma) meaning "breath" (or its modern Greek orthography variant πνεύμα meaning in a spiritual context "spirit"), and may refer to the eponymous philosophical or spiritual concepts of the "breath of life" or the "spirit", as indicated by the Greek letters written beneath her Core Crystal. 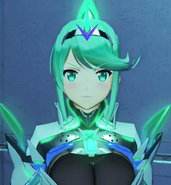 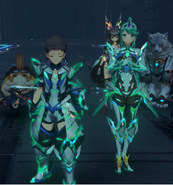 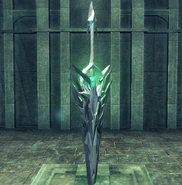 The third sword of the Aegis, Pneuma's sword

The third sword of the Aegis, Pneuma's sword