Xenoblade Wiki
Register
Don't have an account?
Sign In
Advertisement
in: Pages with spoilers, Poppi, Blades,
and 3 more
English

View source
watch 01:26
Who is Poppi α?
Do you like this video?
Play Sound
For her other modes, see Poppi QT and Poppi QTπ.

Poppi α (Japanese: ハナ ジェット・スパークモード, Hana Jetto Spāku Mōdo, lit. "Hana Jet Spark Mode", abbreviated ハナJS, Hana JS or ハナ, Hana) is an artificial Special Legendary Blade in Xenoblade Chronicles 2. She was built by Tora, whom she calls "Masterpon", as a robotic companion. She has a powerful metallic body and perfectly practices the Nopon language. Although Poppi α is not a natural Blade awakened from a Core Crystal and Tora is not a Driver, they work as a kind of Driver and Blade duo during battle. She originally uses the power of earth with a Tank class, but she can equip wind, ice, and electric element cores through Poppiswap. In battle, Tora can fight using the Drill Shield, particularly to attract enemies and direct their attacks on him while protecting his allies offering them offensive opportunities. Poppi α can be upgraded through the Poppiswap mechanism. She views Lila as her older sister.

Despite being an artificial Blade, Poppi has a fully human personality and is able to feel emotion, though she speaks like a Nopon. Befitting of her childlike appearance, Poppi has a lot of childhood innocence and curiosity. However, this occasionally irks Tora, as Poppi does not possess the social awareness when sharing something that would embarrass Tora. As Tora's creation, she is very loyal to him, though she occasionally voices a snarky opinion of Tora's habits from time to time. Poppi also gets along very well with the rest of the party. In particular, she displays sadness when another party member is suffering and when she is worried that she will turn on her friends. She admires Rex and Pyra, wanting Tora and herself to be like the duo. This is so much so that she is heartbroken when she sees Rex give up after Pyra gets captured.

Poppi is both clearly a robot and clearly a child; she is very short and slight and her entire body is metal-plated and bolted together. Her core crystal is round and orange, unlike the blue of natural Blades. She has purple hair, pale skin, orange eyes and red accents on her black and grey armour. She retains this color scheme across both of her upgrades. Poppi α wears black pantaloons, a white cap with a red bow, and a red cape with a white lily on its lapel. Her arms and legs are clunky and artificial-looking.

Poppi α has two alternate costumes which can be obtained as DLC Aux Cores via Challenge Battle Mode. These are:

Tatazo, Tora's father, gave Tora Lila's blueprints and told him to run away and continue his work when their lab was attacked. Tora then fled to Torigoth, and he began improving on Lila's blueprints to create Poppi. With the help of Rex, he gets the materials necessary to complete Poppi. Poppi and Tora then assist in rescuing Nia and Dromarch and join Rex on his travels.

When the party reaches Alba Cavanich, the party runs into Muimui, who is surprised to see Poppi fully functional. Lila attacks the city that night, and the Ardainian solders mistake Poppi for Lila, prompting Mòrag to attack the party. Niranira later intervenes and tells them Poppi is not the culprit.

The search for Lila has the party traveling to the Old Factory, where Bana and Muimui were creating artificial Blades. Bana later controls Lila into attacking Poppi. Lila claims that her upgraded ether furnace makes her stronger, while Poppi claims that her strong bond with Tora is more important. Eventually, Lila goes back on her orders and begins listening to Tatazo. Lila helps upgrade Poppi's ether furnace, causing her to transform into Poppi QT. Despite the upgrade, most of the game's cutscenes show Poppi in her α form.

After Rex loses Pyra at the hands of Jin, he gives up and announces that he will return to Argentum. Poppi walks up to Rex, claiming that the real Rex wouldn't give up after one loss. She reveals that she and Tora look up to Rex, and she is hurt to see Rex give up. Rex eventually agrees not to leave the party.

While traveling in the Land of Morytha, Poppi sneaks away from the group while they are sleeping. Mythra joins her and the two look over the skyline, with Mythra claiming that humanity's technology ultimately brought their downfall. Poppi then asks if she, as a technological advancement, will soon destroy the world. Mythra then promises to make sure Poppi will not destroy the world, but Poppi must repay an unspecified favor, to which Poppi agrees.

As the World Tree begins to collapse, Pneuma pulls aside Poppi and Azurda and asks them to do something. Poppi initially refuses to do so, but Pneuma brings up the promise she made to Mythra. Pneuma eventually destroys a path before she states that she must activate Aion and destroy the World Tree. Rex tries to get Poppi's help in getting back over to Pneuma, but as a part of her promise, she says she can't. Poppi then leaves the World Tree with the others and happily hugs Pyra and Mythra when they return.

As a legendary Blade, Poppi has no Blade Quest, but does take part in a large number of Heart-to-hearts:

These stats correspond to Poppi α wielding the Primitive Shield with no Role CPU bonuses or Affinity Chart rewards. Different Core Chips and Role CPUs result in different adjustments to each stat.

As an artificial special Blade, Poppi α has her own Blade mechanics and a particular customization. Her element, role, skills and Arts can be changed using items earned from playing Tiger! Tiger!, a mini-game created by Tora's grandfather, Professor Soosoo.

Poppi α is one of the characters who can appear on the Super Smash Bros. Ultimate DLC stage, Cloud Sea of Alrest, where she may be present in the background alongside Tora. Poppi α also has a Spirit that can be unlocked on the Xenoblade Chronicles 2 DLC Spirit Board, where she is represented by a Mii Gunner, Daisy, and Zero Suit Samus, each fought one after another. Her spirit can alternatively be summoned with the spirits of Tora and Flare.

Poppi α's Japanese name, Hana JS, may be a reference to "Joshi Shougakusei" (女子小学生) meaning "Elementary School Girl". Hana is the Japanese word for flower while a Poppy is a type of flower. 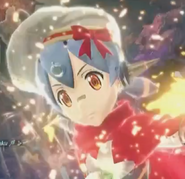 Tora using a Drill Shield in a battle