Raoul (Japanese: ルヒオル, Ruhioru) is a Homs in Xenoblade Chronicles. He can be found in the southern portion of the Military District of Colony 9. 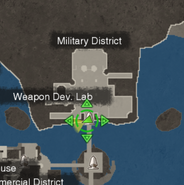 Raoul at Colony 9 in the original version (black circle).

Raoul at Colony 9 in Definitive Edition
Add a photo to this gallery
Retrieved from "https://xenoblade.fandom.com/wiki/Raoul?oldid=453531"
Community content is available under CC-BY-SA unless otherwise noted.