Xenoblade Wiki
Register
Don't have an account?
Sign In
Advertisement
in: Pages with spoilers, Riki, XC2 stubs,
and 12 more
English

Riki (Japanese: リキ; English dub: /ˈrɪki/) is one of the seven playable characters in Xenoblade Chronicles and a member of the Nopon race. Despite his mannerisms, he is actually 40 years old and six of his children can be found in Frontier Village. In the English version, Riki eventually reveals (during a side quest) that he has a total of eleven children. He begins accompanying Shulk and his party after the group reaches Frontier Village. He becomes playable during Chapter 7.

Riki is a Nopon with blond and orange fur, brown eyes, two small fangs in his mouth, a visible blush on his cheeks, and blond hair with red highlights at the tips. His default outfit is a sleeveless blue and purple jacket, a brooch-like red and light orange badge, and a brown backpack that holds his biter when not in battle.

Naturally talkative, Riki often goes on at length about how he is actually a legendary hero spoken of in Nopon prophecy. In truth, his position as a "hero" was only granted by Chief Dunga as a way to pay off the heavy debts that have arisen from his and his children's huge appetites. Apart from this, Riki has very little involvement within the story's major plot, instead contributing to most of the game's comic relief.

Quotations within the game show that Riki acts very much like his appearance: he is highly energetic, positive about mostly everything, and often exclaims what he feels with gusto, similarly to an excited child. In battle, his enthusiasm helps to calm several party members like Melia and Sharla, while being a nuisance to others like Reyn.

Due to his overconfidence of being the "Heropon," Riki is also prone to bouts of childish "hero talk," often describing events in a way that made it seem like he contributed much more than he actually did. In-battle quotations show this very well, as he exclaims several lines such as "Heropon run from nothing!" and "Heropon is biggest, strongest!", while also calling his party members "sidekicks" to give himself more of the limelight. Sometimes, he will even outright proclaim that an issue that has been solved was "all thanks to the Heropon." However, this is all taken lightly by Shulk's party.

Despite all this, Riki does have a knowledgeable side. His first suggestion to Shulk's party was to find an area with lots of Ether Crystals in order to hunt down a Telethia that was terrorizing Makna Forest, as he knew Telethia were attracted to Ether. He also reads his friends's thoughts better than what one might expect, as he made an excuse to rest during the party's trek on the Fallen Arm before admitting to Dunban his actual reason: he stopped only for Melia to rest, as she was hiding the fact that she was tired and would not admit it to anyone. Finally, he was able to relate to Dunban's bond towards his sister Fiora due to him having a family himself, and managed to have a Nopon-to-Homs talk with Dunban regarding family matters, to Dunban's surprise.

The party is first introduced to Riki in a short, humorous scene. The characters are seemingly unimpressed with the compact hero and are unsure what to make of him. This does not improve upon learning that Riki expects them to find equipment for him, too.

Riki informs the group that his reason for being the Heropon (chosen legendary warrior for the Nopon; English dub: /ˈhɪəroˌpɒn/) is that he owes "lots of monies" to the people of Frontier Village. However he does mention that they will forgive his debts should he successfully slay the "Dinobeast", a term the Nopon refer to a Telethia, that has been plaguing Makna Forest. When Reyn doubts if Riki will be of any help, he immediately suggests that they hunt the "Dinobeast" by finding a place where there are many Ether Crystals. Apparently the Telethia they are hunting prefers to nest where there are Ether Crystals.

Upon finding the Telethia, Riki becomes quite angered with the way "his Makna Forest" has been damaged. Melia mentions that Telethia will absorb Ether from the surrounding environment. They engage the beast in battle. After the fight, Riki takes most of the credit back in Frontier Village for slaying the "Dinobeast," even though according to the rest of the group, he did not actually do very much. Chief Dunga decrees - much to Riki's annoyance - that Riki should travel onward with the party to do more heroic deeds, and Riki begrudgingly obliges. He fast grows fond of his "sidekicks" though, and remains with the party from here on.

In the Future Connected extra epilogue story, two of Riki's and his wife Oka's children, their daughter Nene and their adoptive son Kino, have a central place accompanying Melia and Shulk and being playable in the new area Bionis' Shoulder. Riki is seen with Oka in the epilogue.

While Riki lacks arts that deal high amounts of damage immediately, he has an array of arts capable of inflicting a variety of status ailments (called debuffs) onto enemies. As such, he does not inflict as much immediate damage compared to other party members, but excels at softening enemies by stacking status ailments to deal considerable amounts damage over time. Once he stacks up enough status effects, he can also use Say Sorry to remove them, which deals more damage if the enemy has more status ailments.

Riki also brings beneficial party buffs to battle. While he can heal his teammates with You Can Do It, he also has several powerful auras such as Hero Time, which randomly boosts a single stat immensely while preventing the party's tension from dropping, while his Talent Art Yoink! lets him steal stats and items from enemies, eventually even EXP and AP too. Riki additionally has an array of gimmicky arts to fit with his quirky personality: Roly-Poly may forcibly topple an enemy or bind it if the art fails, Bedtime causes every enemy (and Riki himself) to fall asleep, Behave will paralyze and calm crazed enemies, and Happy Happy allows Riki to manually charge the Party Gauge when he is at high tension.

Interestingly, Riki has the highest HP stat of any of the playable characters (even more than Reyn), and although he initially can only wear light armour his later skill tree Heroism allows him to equip heavy armour. He does, however, have one downfall: due to his very short stature, he tends to swim rather than walk in water (even water shallow enough for the other party members to walk in), making him useless in water battles.

Riki has the following Skill Branches:

Vivacity is one of Riki's initial three Skill Branches, and the first skill is unlocked at the start of the game.

Prioritizing Vivacity improves Riki's maximum HP based on the number of skills that have been unlocked in this branch:

Innocence is one of Riki's initial three Skill Branches.

Prioritizing Innocence improves Riki's Ether Defence based on the number of skills that have been unlocked in this branch:

Flexibility is one of Riki's initial three Skill Branches.

Prioritizing Flexibility improves Riki's Agility based on the number of skills that have been unlocked in this branch:

Cowardice is Riki's fourth Skill Branch. It can be unlocked by completing Getting Bigger!, which requires 3.5☆ affinity with Central Bionis.

Prioritizing Cowardice improves Riki's block rate based on the number of skills that have been unlocked in this branch:

Heroism is Riki's fifth Skill Branch. It is obtained by completing Final Challenge of the Sage.

Prioritizing Heroism improves Riki's Critical Hit rate based on the number of skills that have been unlocked in this branch:

Riki owns unique Shooter and Engineer abilities for Gem Crafting, they are:

Riki is a Challenge Battle Boss in Xenoblade Chronicles 2. He is fought as a level 70 Nopon enemy during the wave 12 of the This Year's Heropon Challenge Battle, available as downloadable content from the Challenge Battle Mode Pack of the Expansion Pass. This enemy drops no items.

Riki appears in Super Smash Bros. for Nintendo 3DS / Wii U and Super Smash Bros. Ultimate during Shulk's Final Smash, performing a Chain Attack with Dunban and Shulk. He also appears as an Assist Trophy in both games, using multiple arts.

Knocking out Assist Trophies was added in Ultimate, but Riki cannot be KOed.

Riki also appears as a Spirit on the Spirit Board as well as in the World of Light in Adventure Mode. Winning his Spirit battle in Adventure Mode unlocks his Dojo, which specializes in boosting Spirits' Special Attack power. 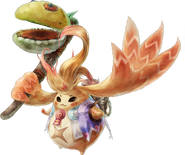 Riki with his Biter 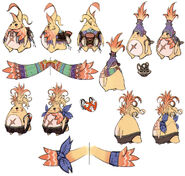 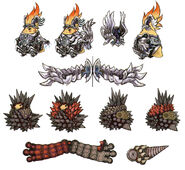 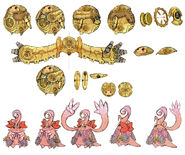 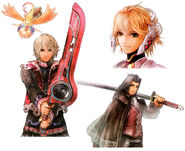 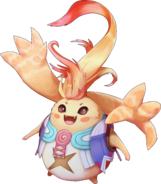 Riki as he appears during the Challenge Battle This Year's Heropon

Riki as he appears during the Challenge Battle This Year's Heropon

This article about Xenoblade Chronicles 2 is a stub. You can help the Xenoblade Wiki by expanding it.