"I swear I won't stop until I've scrapped each and every one of you!"
— Sharla

Sharla (Japanese: カルナ, Karuna, Carna; English dub: /ˈʃɑːrlə/) is one of the seven playable characters in Xenoblade Chronicles, and a medic of the Colony 6 Defence Force. She uses an ether rifle to fight, and her speciality is healing. She is Juju's older sister and Gadolt's fiance. She becomes playable during Chapter 4.

Sharla is a kind-hearted, strong-witted, and loving person. However, she has a vengeful side that is first seen when Xord reveals that he ate the entire Defence Force of Colony 6. She is also shown to be devoted to those she cares for, especially Gadolt and her young brother Juju. She originally became a medic so she could protect Juju and heal him whenever he got hurt according to the Heart-to-Heart "Revisiting the Past". She also acts motherly especially in all Heart-to-Hearts with Dunban and she treats Melia like her own sister, encouraging her feelings for Shulk. Sharla intends to become a doctor once things have settled down, according to "The Colony Reborn".

Although after particularly harrowing incidents causes Sharla to lose her will to continue, encouragement from the party and her own resolve to fight allows her to carry on, determined to keep fighting until the antagonistic forces that threaten those she cares for are taken down once and for all.

At 1.68 m (5'6") Sharla is a fairly tall woman, with tan skin, long black hair reaching just past her shoulders, soft brown eyes, and a beauty mark on the lower left of her lip.

Her standard outfit consists of a blue crop top with short rippled sleeves and four square golden button-like jewels in front, an orangish red waistcoat with three rifle bullets in the pockets, a pair of silver goggles with dark brown straps, white shorts, a grey belt, brown elbow-length gloves with dark brown straps and silver buckles, and a pair of dark brown knee-high boots with blackish brown soles, silver buckles on the straps, and blue stockings pulled over the top of them.

In Definitive Edition, if equipped with some Orion-type headgear, Sharla's hair becomes orange and tied in an updo, with blunt-cut bangs.

Prior to the start of the story, Sharla and her younger brother Juju lived in Colony 6. Sharla was due to marry a member of Colony 6's Defence Force named Gadolt. Unfortunately, the Mechon attacked, led by Xord, and destroyed Colony 6, decimating its population. Sharla and Juju were tasked with helping the young and elderly flee the Colony.

It is at the Refugee Camp that Sharla meets Shulk and Reyn. She almost immediately takes a liking to Reyn but has trouble believing that Shulk can witness the future. When Juju runs away the three give chase, and Sharla reveals her speciality is healing. They eventually reach Juju, who has been captured by a Mechon M71, and defeat it. During this battle, Sharla realises that Shulk's visions are real.

Unfortunately for Sharla, their victory is short-lived as Xord appears and terrorises the group. He kidnaps Juju, causing Sharla to faint from the stress of the ordeal for about four hours. Upon recovering, Sharla leads the party through the Ether Mine, below Colony 6, and they find Xord. When she finds that Xord ate the entire Defence Force, she swears not to stop until she has destroyed every Mechon. After the battle, she is asked to accompany Shulk on his journey. She also receives Gadolt's Rifle from Otharon.

Sharla's healing helps Melia when they find her injured in Makna Forest; Sharla heals her and fast becomes her friend, helping Melia with her feelings for Shulk. Along the way she begins to develop her own affection for Reyn, although does not act on it as she believes that Gadolt must still be alive somewhere.

In battle, Sharla acts mainly a healer. She uses a rifle as a weapon, with a big focus on Ether-based arts. Due to using a rifle, Sharla's auto-attacks and arts have the longest range in the party, albeit having low damage output. Moreover, after a certain amount of arts have been used, Sharla will need to Cool Off, which makes her unable to move during its animation and erases her active auras. If a Chain Attack is activated while Sharla is cooling off, she will not be able to participate.

Sharla has a great variety of healing and reinforcement arts, which make her very valuable in order to buff up the party. She is also the only character besides Reyn to have an initial Skill Tree that allows her to equip heavy armour.

Sharla has the following Skill Branches:

Devotion is one of Sharla's initial three Skill Branches, and the first skill is unlocked at the start of the game.

Prioritizing Devotion improves Sharla's Ether based on the number of skills that have been unlocked in this branch:

Perseverance is one of Sharla's initial three Skill Branches.

Prioritizing Perseverance improves Sharla's Physical Defence based on the number of skills that have been unlocked in this branch:

Confidence is one of Sharla's initial three Skill Branches.

Prioritizing Confidence improves Sharla's Strength based on the number of skills that have been unlocked in this branch:

Reliance is Sharla's fourth Skill Branch. It can be unlocked by completing Avenge a Mamapon's Death, which requires 4☆ affinity with Frontier Village.

Prioritizing Reliance improves Sharla's Ether Defence based on the number of skills that have been unlocked in this branch:

Prioritizing Affection improves Sharla's maximum HP based on the number of skills that have been unlocked in this branch:

Sharla owns unique Shooter and Engineer abilities for Gem Crafting, they are: 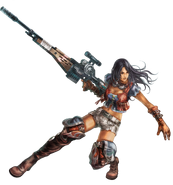 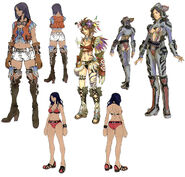 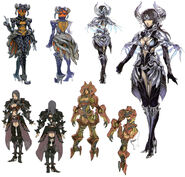 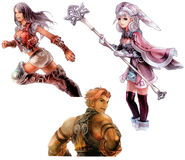