Soul Voices are game mechanics in Xenoblade Chronicles X. They are useful tools for the team with various effects, such as Hit Points recovery.

If a character gives advice, it can be considered and the effects will be earned. The advice appears as a colored text box above the related character, its color varying depending on the request of the character; a request for a Ranged attack will always be marked with a yellow text box, for example. The Arts that will operate the Soul Voice will begin to glow on the player's Arts palette.

During a battle, Soul Voice dialog with the allies can occur. There are two types of dialogs, Soul Voice and Soul Challenge, causing effects such as "HP Regeneration" or "Damage Up" on enemy by activating them.

When an ally says something during the battle, for example, "They're off guard. Stagger them with a melee attack!" or "Engaging! Lay down some fire for me!", a suitable Art will be highlighted on the Art Palette. Answering by using the suitable Arts, the two characters involved in the dialog will have some of their HP restore and the Affinity with this ally will increase.

If a dialog appears such as "Start the battle with a Melee Weapon" and "When the HP reach 30% or less", in some particular cases, an orange circle will appear in the center of the screen. If the B Button is pressed at the right time (the orange circle becoming superposed to the blue circle and before vanishing), the controlled character will say something and request a type of art. If any ally answers with the art, some bonus such as "All Allies' HP Recovering" or "Soul Stage Level Up" will be obtained. If the timing appears Perfect, TP bonus can also be earned.

The type of Soul Voice and effects of the Soul Challenge activation can be customized beforehand. For example, one of the three effects "Damage Up +100%", "Break Down" or "Gain 200 TP per Hit" effects can be chosen for when the Draw Melee Soul Challenge dialog is answered.

If a Soul Challenge is successful, the Morale Level increases by one level granted some effects such as "Soul Voice Activation Rate Up" or "TP Bonus Up" for a "Perfect". The Morale Level is also known as the Soul Stage in the Japanese version. 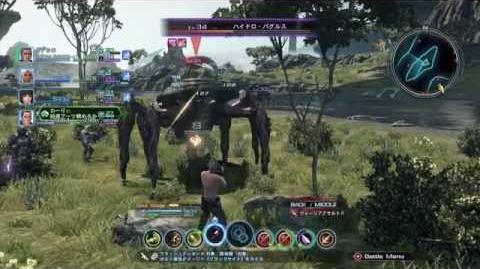