Shulk is the only playable character from Xenoblade Chronicles. His attacks mostly revolve around his moves from the game, but some are a bit different. The other main characters from Xenoblade Chronicles appear as trophies, and Fiora and Riki appear as special items in the Smash Tour mini-game. Riki appears as an Assist Trophy, using various Arts to the summoner's advantage. Finally, Riki and Dunban cameo in Shulk's Final Smash, a Chain Attack.

Shulk's standard special move is switching between the five available Monado arts in this game. Arts can be shuffled through by pressing the special attack button, and will show a different kanji character for each art. Upon selection, each art can be cancelled by either pressing the special attack button 3 times or holding it for 3 seconds without moving. They are as follows:

Shulk's side special allows him to perform his signature Back Slash. He jumps up before slamming the Monado down, similar to Link's dash attack. Just like the name suggests, and like in Xenoblade Chronicles, it deals more damage and knockback when used from behind.

Shulk's up special makes him perform an Air Slash. Here, he jumps up one time into the air while swiping the Monado nearby, similar to the Dolphin slash. By pressing the attack button again, he performs another small forward slash, which allows him to gain a little more height and distance.

Shulk's down special is Vision, The most powerful counterattack in the game. There are 2 variations of this counter. The standard is the normal counter, where Shulk steps back and then prepares to counterattack; this is done simply by initiating a counter. A fast version of the counter can also be performed if, once the counter is initiated, the player tilts the control stick in the direction of the attack. This counter is quicker but is slightly weaker than the normal.

These are some minor notes for Shulk's moveset.

Like all other characters in the games, Shulk has two alternate custom moves available to him.

Shulk can equip all badges, as well as Sword, Jacket, and Shoe equipment items.

Shulk's standard outfit is based off of his standard appearance in Xenoblade Chronicles. His other six correlate with a specific character, which are (going from left to right) as follows: Mecha-Fiora, Dunban, Reyn, Sharla, Melia, and Riki. His last costume puts him in his swimming trunks, which is his armourless appearance.

In the Boxing Ring stage on the Wii U version, each character has an alias. Shulk's alias is "The Visionary," referring to the fact that he can have visions. In PAL versions of the game, his alias is "Has Visions of Victory," once again alluding to his power to see the future.

Guidance Conversations are discussions that occur between Pit, Palutena, and Viridi on the Palutena's Temple stage on the Wii U version, similar to the Codec calls from Brawl. Each character has a different conversation, and Shulk's is as followed. 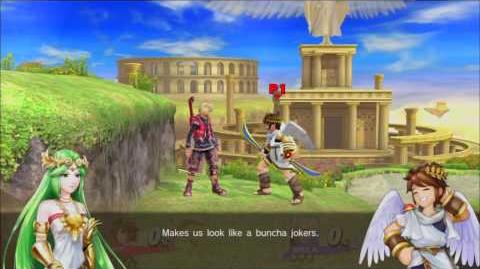 Sakurai first revealed Shulk on Miiverse, where he posted a second Pic of the Day just to show off the new challenger.

"Pic of the day. From Xenoblade Chronicles, Shulk joins the battle!! He's not the type of character that would usually appear in the Smash Bros. series, but we worked really hard to make it happen. We're very happy with how he turned out. This stage is Gaur Plain." [3]

"Shulk's sword, the Monado, slashes enemies with a beam when activated, so it can strike from long range. What really makes this weapon unique is that when the Monado Arts are activated, it can change Shulk's features and abilities! Emerge victorious in battle by changing your abilities strategically!!"[4] 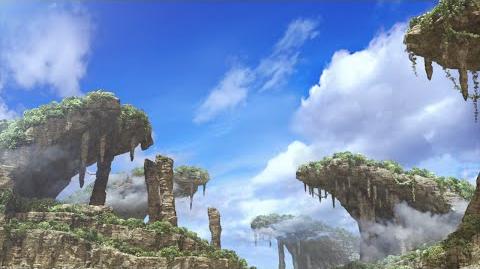 Gaur Plain makes an appearance as a stage in both versions. In the Nintendo 3DS version, the stage is much smaller, and features 2 large platforms with 5 smaller platforms under them. The Wii U version of the stage is much larger and has many more platforms. This stage is compatible in 8 Player Smash.

On the Wii U version (albeit not during 8-Player Smash), Metal Face can appear during nighttime on the stage. Once he appears, he may destroy one of the two larger platforms with a laser beam and then sit down on the remaining platforms on one side. He will not disturb the fighters unless they attempt to attack him. He will attack by swiping his claws back and forth. Upon defeat, he creates multiple explosions, harming everyone except the one that defeated him, before falling. If not defeated, he will fly away when dawn breaks. The platform that he lowered will eventually be restored. It is possible for Metal Face to show up multiple times during a match, even if he is defeated.

Smash Tour is a mode exclusive to the Wii U version. In this mode, 4 Miis walk around a board collecting powerups and fighters. A few Xenoblade Chronicles aspects appear in this mode.

Metal Face can also appear on the board, but it is very rare. If a player runs into him, all players will fight against Metal Face on Gaur Plain. The player that defeats Metal Face, or the last person standing in the fight, will recieve a big stat boost.

In addition to appearing during Shulk's Final Smash, Riki appears as an Assist Trophy. In his Assist Trophy form, Riki can use up to 6 Arts, being Happy Happy, Freezinate, Bed Time, Roly Poly, You Can Do It, and Yoink!. Happy Happy will boost the attack and launching power of all fighters, Freezinate freezes other fighters, Yoink! pulls all items towards Riki, Bed Time puts all opponents to sleep, Roly Poly will make all opponents trip if they are on the ground, and You Can Do It heals all fighters. He activates 3-4 arts each time he is summoned.

"Pic of the day. The legendary hero Riki appears as an Assist Trophy and in Shulk's Final Smash!! As an Assist Trophy, he uses many arts like Happy Happy, Freezinate, and Yoink! He sounds a bit like Tingle…but don't worry, Tingle will make an appearance too.
By the way, a cursor will appear above Assist Trophies and Pokémon to indicate which fighter is its ally. Now you can tell right off the bat who it belongs to!!" [5]

There are multiple trophies of various characters from Xenoblade Chronicles in both games, with the majority being in the Wii U Version.

There are few Xenoblade Chronicles trophies in this version of the game.

Shulk and his Companions / Shulk and Co.

The following is a list of tracks from the Xenoblade Original Soundtrack. Most tracks play only in the Gaur Plain stage, with "Mechanical Rhythm" being available in Smash Run. The only non-Xenoblade Chronicles track that plays is "The validictory elegy". A portion of "You Will Know Our Names" plays as Shulk's victory theme.

Shulk was announced to have an amiibo in Wave 3 of the Super Smash Bros. set in November of 2014. It was released February 2015.

Shulk, similar to Xenoblade Chronicles itself, was a GameStop exclusive amiibo, adding to its rarity. Originally Shulk was only available to those who managed to preorder him from Gamestop while he was still available. However, he was scheduled for a reprint run in May 2015, but Gamestop ran out of amiibo yet again. At the time of launch, he was considered the second-rarest amiibo by many, second only to Rosalina and Luma. Eventually the amiibo was released at other retailers.

Aside from Super Smash Bros. for Nintendo 3DS / Wii U, Shulk is also be compatible with Xenoblade Chronicles 3D using the New Nintendo 3DS amiibo functionality. This amiibo will unlock character models and songs for the player to view and listen to.

Start a Discussion Discussions about Super Smash Bros. for Nintendo 3DS / Wii U