Professor Tatazo is a character in Xenoblade Chronicles 2. He is Tora's father, and who worked with his own father Professor Soosoo to create an artificial Blade called Lila, due to the family's lack of ability to awaken Blades via Core Crystals. However, the laboratory was attacked, resulting in Soosoo's apparent death, the seizure of the unfinished Lila, and the abduction of Tatazo. However before his capture, Tatazo managed to hand over a finished ether furnace and artificial Blades blueprints to Tora, who quickly escaped capture.

Tatazo is later found in the Abandoned Factory in the Empire of Mor Ardain, being forced to manufacture artificial Blades for Bana. After being rescued, he and Lila relocate to Tora's House in Torigoth. He can later help his son upgrade Poppi into her final form via the quest Powered-Up Poppi in Chapter 8. 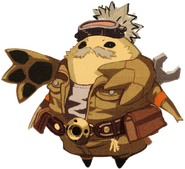 This article about Xenoblade Chronicles 2 is a stub. You can help the Xenoblade Wiki by expanding it.