Telethia, the Endbringer (Japanese: 終焉のテレシア, Shūen no Tereshia) is a Tyrant in Xenoblade Chronicles X. It is a form of the Telethia and is found in Noctilum, above the Divine Roost. At level 99, it is the most powerful enemy in the game, yet it is non-aggressive and will not attack the party first.

It must be defeated during one route of A Fateful Choice. Defeating it as part of the mission will not count towards segment recon.

※ Gravity version will be used if the fight is drawn out long enough, after which Telethia will switch back to an Ether version.

※ Dropped only during A Fateful Choice

"This giant indigen circles the skies of Noctilum, making its home in the giant trees there. It's rather unpredictable, and has even been known to assist BLADEs." 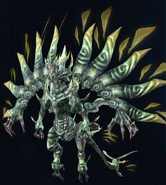