Xenoblade Wiki
Register
Don't have an account?
Sign In
Advertisement
in: Pages with spoilers, XC2 Characters, Titans,
and 4 more

View source
watch 01:24
What are Titans?
Do you like this video?
Play Sound

Titans (Japanese: 巨神獣, Kyoshin-jū, lit. Giant Divine Beasts, read as アルス, Arusu) are creatures in Xenoblade Chronicles 2 and Torna ~ The Golden Country. Titans greatly vary in size, from small ones like Azurda and medium sized ones like the Titan Battleship rather used for transportation, to enormous ones such as Gormott, Uraya and Mor Ardain. These larger Titans serve as the landmasses that make up the world of Xenoblade Chronicles 2. They march toward death, circling the World Tree in the world of Alrest overrun by a sea of clouds. Civilizations dwell on the Titan's backs, and many Nations have been established, ruling over the Titans. Each Nation is home to different cultures, various ecosystems, and diverse regions.

It is revealed that Titans are actually Blades who have reached the end of their life-cycle and have become Titans. However they have no memory of their previous life as Blades. In turn Titans produce Core Crystals which become new Blades and eventually new Titans.

Titan ships on the cover of Collected Works 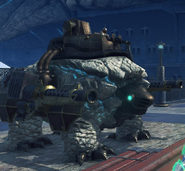 An Archelon, a small weaponized Titan used by the Empire of Mor Ardain