Xenoblade Wiki
Register
Don't have an account?
Sign In
Advertisement
in: Pages with spoilers, Tora, XC2 Nopon,
and 7 more
English

View source
watch 01:33
Who is Tora?
Do you like this video?
Play Sound
For the NPC in Xenoblade Chronicles X, see Tora (XCX).

"Destiny calling for Tora. Rude not to say "hello" back."
— Tora

Tora (Japanese: トラ) is one of the main playable characters in Xenoblade Chronicles 2. He is a Nopon and the creator of the artificial Blade Poppi. Despite being the only party member incapable of being a Driver, he is the only one who can use the various forms of Poppi in battle. Tora joins the party after completing the main quests Artificial Blade Parts 1 and Artificial Blade Parts 2 during Chapter 2. Upon joining the party he is equipped with a common Nopon Mask.

Tora, much like his father and grandfather - Professors Tatazo and Soosoo, respectively - aspired to be a Driver, but his attempt at resonating with a Core Crystal was unsuccessful. Due to this, he started developing an artificial Blade in order to achieve his dream.

He tends to call Rex "Rex-Rex" (Japanese: アニキ, Aniki, "Big Brother"), as a sign of respect, which is common among Nopon, due to his admiration towards him.

Similar to other Nopon, Tora is generally friendly and gluttonous. However, he is shown to have great inventive vision and pride as a mechanic. Despite being usually annoyed by Poppi's disrespectful behavior, he tries to keep her always in the best possible conditions. Tora's main personality flaw is an idealization of "cutesy" behavior in women, which is usually frowned upon by his friends.

Tora is a young Nopon with orange and brown feathers and dark brown eyes. Due to being a mechanic, he wears denim dungarees equipped with numerous tools, including a large wrench. Tora is also particularly large in size, standing out among many other Nopon despite his young age. In a post-battle dialogue, Shulk mentions that Tora's size suggests he is around 50 years old; "So this world has Nopon too. Tora, judging by your body, I'd guess you're fifty or so, right?".

Tora has three alternate costumes which can be obtained as DLC Aux Cores via Challenge Battle Mode. These are:

Tora, his father Tatazo, and his grandfather Soosoo could not resonate with a Blade. As a work around, the three of them began working on an artificial Blade. One day, a masked man came into their workshop and seemingly shot Soosoo. Tatazo helped Tora escape the masked man and the gang of Tirkin, but he himself was captured. Before being captured, Tatazo gave Tora the blueprints to their artificial Blade. Tora then fled to Torigoth. A year before meeting Rex and Pyra, Tora applied for Driver recruitment. However, he lacked the potential to awaken a Core Crystal, as a consequence he got a nosebleed for three days.

As Rex and Pyra are about to be captured by Brighid and Padraig, Tora shoots a missile at a nearby pipe, which spews water and temporarily weakens Brighid. Rex and Pyra join up with Tora, where he reveals his inability to resonate with a Blade. The crew then formulates a plan to break into the Titan Battleship via the Treetop Path and rescue Nia and Dromarch. Before doing so, Rex helps Tora get the few remaining materials to activate Poppi, Tora's Artificial Blade. After Rex leaves Torigoth, Tora decides to join him on his adventure in hopes of finding his father. He convinces his uncle Umon to give the party a small ship so that they may journey to the World Tree, though they end up in Uraya instead.

Upon arriving in Mor Ardain, Tora runs into Muimui, his grandfather's assistant, who admits that he doesn't know where Tatazo is. The night they arrive in Alba Cavanich, a robotic girl is seen attacking the city. Tora acknowledges her as Lila, the original artificial Blade model that he, his father, and his grandfather worked on. He then reveals his backstory to the party before deducing that his father must be alive, as he is the only one who could complete Lila. The Garfont Mercenaries discover that Lila is hiding out in the Old Factory, presumably along with Tatazo.

In the Old Factory, the party discovers that artificial blades are being produced, further supporting that Tatazo is alive and inside the factory. Tora eventually finds his father and the two reconcile. Muimui then comes in, revealing that he was keeping Tatazo captive in the factory, and orders his Tirkin troops to attack Tora. Bana then appears, reveals he is working with Muimui, and orders Lila to attack Tora and Poppi. Eventually, Lila destroys Bana's control device and claims that her true "Masterpon" is Tatazo. Tora then briefly leaves the party while Rex and Nia pursue Bana and Muimui.

Bana and Muimui activate their ultimate artificial Blade, Rosa, and the party faces some difficulty defeating it. On cue, Tora arrives and reveals that Lila helped Poppi upgrade her ether furnace, and Poppi then transforms into Poppi QT. With this new power, they are able to subdue Rosa, though Bana escapes alongside Mikhail and Patroka. After this, Tatazo and Lila will appear in Tora's house. The sidequest Powered-Up Poppi later sees Tora upgrading Poppi into Poppi QTπ.

These are Tora's Idea Stats when he joins the party.

Unlike other Drivers, Tora is capable of increasing his Idea Stats by using specific items obtained in the Land of Challenge. These items are:

Unlike the rest of playable Drivers, Tora is not able to resonate with Core Crystals. However, he is the only one capable of using the various forms of the Artificial Blade Poppi.

In New Game Plus, if any form of Poppi is sent on a Merc Mission, Tora will be locked out of the active party until she returns.

Poppi's Element and Role can be freely changed with Poppiswap.

After finishing the game and installing Patch (Ver.1.3.0), the New Game Plus will be available and will allow Tora to get a new Affinity Chart.

A spectral version of Tora is fought as a Driver enemy during Chapter 10, in the First Low Orbit Station. He is fought alongside Zeke and they are the last party members to be fought. He is supported by Poppi α.

Tora is one of the characters who can appear on the Super Smash Bros. Ultimate DLC stage, Cloud Sea of Alrest, where he may be present in the background alongside Poppi. Tora also appears as a Spirit on the Spirit Board and in Adventure Mode's World of Dark, in the Mysterious Realm, at an intersection where the player is asked which of the following Spirits is a Nopon. Fighting Tora's Spirit Battle first will unlock a treasure when traversing to the next area. His spirit is represented by a puppet fighter of Jigglypuff assisted by a minion fighter of Daisy, whose shield has extra durability. 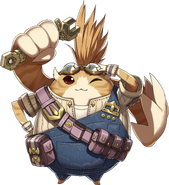