For the character in Xenoblade Chronicles 2, see Tora (XC2).

After hearing tales of Tatsu's success at BLADE, this merchant-in-training is feeling achievement anxiety.

Tora (Japanese: トラ, Tora; English dub: /ˈtɔər.ə/) is a NPC in Xenoblade Chronicles X. He is Tatsu's self-proclaimed arch-nemesis, first introduced in the Affinity Mission The Ties That Bind, and can later be found at Barista Court in the Commercial District of New Los Angeles. 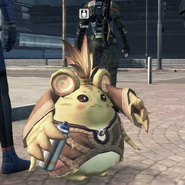 Add a photo to this gallery
Retrieved from "https://xenoblade.fandom.com/wiki/Tora_(XCX)?oldid=437915"
Community content is available under CC-BY-SA unless otherwise noted.