Tyrants (Japanese: オーバード Ōbādo, Overeds) are enemies in Xenoblade Chronicles X that have higher stats and potentially unique skills — similar to minibosses or Superbosses in other games.

Tyrants have unique names and there is only one of each of these monsters in the world. Tyrants are similar to Unique Monsters from Xenoblade Chronicles. All Tyrants have a special frame when looking at them and have special symbols with their level tag. Some tyrants may also have a unique color palette and distinguishing features such as pre-broken appendages. Some Tyrants have unique abilities, such as automatically restoring health (Buchwald, the Guardian), reflecting attributes (Go-rha, the Guardian Deity), having 100 resistance to one or more attributes (Sven, the Sturdy), or reacting to the status of another nearby Tyrant (Gesserith, the Wileworm).

There are 251 Tyrants listed in the Enemy Index. 210 Tyrants have a name that consists of a first-name and a qualifier noun or expression according to the format "(First name), the (Qualifier)" such as Oskar, the Summer Squall. Ganglion-created Mechanoids have simpler titles that describe the function of the Tyrant followed by the species name, such as Air Support Galdr. Some of these Tyrants are Skells owned by Ganglion Tyrants, such as Lyla's Galdr for Lyla, the Lustrous. Nahum, the Red Hare is not listed since she usually cannot be defeated, although she summons Nardacyon, the Shadowless once her HP is reduced to 25% while under certain conditions. A level 32 Simius Tyrant known as the "Iron-fist Bruno" appeared in the early presentations of the game as a beta enemy in an early Primordia, and it retains a mention in-game as "Bruno the Iron-fisted" in dialogue with Da Zeulbe.

These individual named Tyrants are a threat to Humans. For some Missions it is required to slay them. Intending to confront and fight them demands a thorough preparation. Volkampf, the Pursuer is the only Story Exclusive and Mission Exclusive Tyrant, it is only encountered during Chapter 2.

The game servers keep track of the number of times each Tyrant has been defeated and has defeated a party. While online, the exact stats are recorded in the Enemy Index. Each Tyrant can have a bronze, silver, or gold crown before its name to show its approximate threat level, though some Tyrants have not earned a crown. These crowns are decided by the number of parties defeated. If the game starts while offline, the crowns will not be shown.

A specific track, "Uncontrollable", is associated with battles against most Tyrants, although some, such as Dadaan, the Strongest Prone and Pharsis, the Everqueen, use "CR17S19S8" to denote their exceptional ability, while Telethia, the Endbringer and Phanatos, the Netherlord use "raTEoREkiSImeAra" and "In the Forest<X→Z ver.>" respectively, themes unique to the Telethia and Yggralith.

When a Tyrant is defeated, it has a chance to drop a Holofigure depicting the variant of the Tyrant it was obtained from. These holofigures can only be found in silver drops, and cannot be found in gold or bronze drops. For multiple Tyrants with the same variation, the respective holofigure can be obtained from any of them.

This is the list of the Tyrants which do not appear in the Enemy Index or are beta enemies. 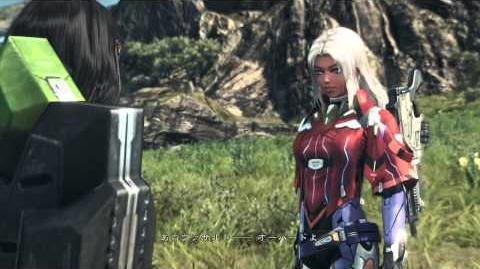