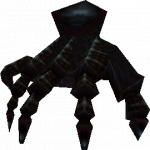 "Ageshu could say things are getting pretty serious..."

Hello, everyone. I'm Ceiling Master, or CM for short. I've been contributing to the Xenoblade Wiki for over seven years, bar a couple of breaks, and I'm a Bureaucrat here.

I'm also a Bureaucrat over at Zeldapedia (and my Zelda Wiki account can be found here). You should check it out. Oh, and also the Ghost of a Tale Wiki. It's just me over there. Fun game, though.

If you have any questions, don't hesitate to drop me a line on my Message Wall.

These pages should be empty at all times.

Any templates I'm using a lot will go here for easy reference.

Over the course of my time here at the Xenoblade Wiki, I've run across some funny comments and interesting vandalism. Some, you had to be there. Others, well, you'll see.

No wonder it's called the "Contaminated Area"...

I'm still not sure what happened there.

But I got better!

The Golden Rule of Comedy — Random does NOT equal funny.

The Great SpongeBob Invasion of 2013.

But it still doesn't count.

I didn't know Hulk Hogan was in Xenogears!

Life is pain, Highness. Anyone who says differently is selling something.

Darker backstory than I thought...

I feel you, mate.

Digging through history reveals UB as the perpetrator of this horrendous mistake.

Not much of a name change.

Sometimes you just have to respect commitment to the bit.

GENDER = BIRD (at least he was apologetic.)

"If you want to know what God thinks of money, just look at the people he gave it to."

Another!
Retrieved from "https://xenoblade.fandom.com/wiki/User:Ceiling_Master?oldid=417494"
Community content is available under CC-BY-SA unless otherwise noted.