View source
watch 01:45
Who is Vandham?
Do you like this video?
Play Sound
For the character from Xenoblade Chronicles X, see Vandham (XCX).

Vandham (Japanese: ヴァンダム, Vandamu), born Aquila Paronet Sol Esteriole, is a character in Xenoblade Chronicles 2. He is the leader of the Urayan Garfont Mercenaries. He is a Driver accompanied by his special Blade, Roc, and acts as a mentor to Rex and the party.

Vandham is a temporary party member, joining at level 20 during Chapter 3 and leaving near the end of that same chapter.

Vandham is a very large Urayan man beyond his prime with gray-brown eyes, a silver mullet with yellow and blue streaks, pointed ears, white scales on both sides of his face, and a large X-shaped scar in the middle of his face. He is a beefy and robust man, possessing a tank-like, bulky physique and incredibly massive muscles.

Before becoming a mercenary, he was a scion of the noble Paronet family. The name "Vandham" was a nickname inspired by someone he looked up to as a child, his birth name being Aquila Paronet Sol Esteriole. He also had a son who died of causes that are never specified. He was a freelancer before he joined the Garfont Mercenaries, and he fought alongside Cole.

Rex first meets Vandham in the Kingdom of Uraya. He and his assistants, Yew and Zuo, challenge Rex and party to a fight for the Aegis. Vandham tricks Rex into exhausting Pyra's power. Just as Vandham is about to deliver a lethal blow to Rex, he stops and reveals that he never meant them any harm; just wanted to test the capabilities of the Driver of the Aegis.

Vandham leads them back to Garfont Village, the home of his mercenary group. Over a meal, Vandham tells Rex that wars involve everybody, one way or another, and that everyone needs a reason to fight. He then joins the party to investigate a large ether energy buildup near the blowhole. Along the way, Vandham teaches Rex how to inflict Topple with Anchor Shot. They find a small decaying Titan near the blowhole, but they are interrupted by an Elder Arachno that managed to bond with the Blade Wulfric. Vandham then tells Rex the Blade life-cycle: Core Crystals are formed from dying Titans, and every time a Blade dies, they revert to their Cores with their memories wiped.

Upon making it back to Garfont, Vandham learns that Rex and Pyra share an unusual bond, resulting in both Rex and Pyra gaining each other's injuries. Akhos interrupts their conversation and Vandham tells them that Torna had killed many Drivers, including some of his friends. After Vandham and Roc help drive off Akhos, Nia tells Vandham about her past with Torna before Vandham dismisses her, telling her to focus on the present.

He then leads the party to Fonsa Myma to meet Cole, who knows how to get to Elysium. Along the way, they encounter Zeke and Pandoria for the first time. Upon reaching the Capital, they notice a large number of warships. They later fight a soldier who stole a child's rations; the child turns out to be Iona, Cole's granddaughter. They watch one of Cole's plays on the Aegis War; Cole later speaks to Vandham and the others and agrees to help them reach Elysium.

After Pyra and Iona are lured out to Olethro Playhouse, Vandham helps Rex and the others fight back against Akhos and Malos. When Obrona uses her power to disrupt the ether flow in the air, Vandham impales himself on Roc's scythes to continue fighting. He begs Rex to escape, but Rex refuses to leave Vandham. He tells Rex to fight his own war before being stabbed and killed by Malos, who was using the Sword Tonfa of Sever. Rex tries to avenge him, leading to Mythra's awakening.

After the battle Vandham is buried in Olethro Playhouse, as it is a mercenary custom to be buried where they fell. Yew and Zuo reveal that Vandham wanted Rex to take charge of the Garfont Mercenaries. Beyond this he is only mentioned by Nia, Rex telling to reawaken Roc about his old Driver, and a flashback in Chapters 7, 8, and 10.

These are Vandham's Idea Stats upon joining the party.

Roc is Vandham's default Blade; Roc cannot be used by any other Driver during Chapter 3, and Vandham cannot use any other Blades himself.

After finishing the game and installing Patch (Ver.1.3.0), the New Game Plus will be available and will allow Vandham to get a new Affinity Chart.

Vandham is fought as a level 20 boss inside the Jebbas Cavern along with his Blade, Roc, and his assistants, Yew and Zuo, and their Blades.

During battle Vandham fights alongside Roc, who increases his dexterity by 15% and is able to use Arts Plus. 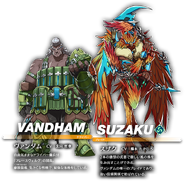 Vandham and Roc in the party